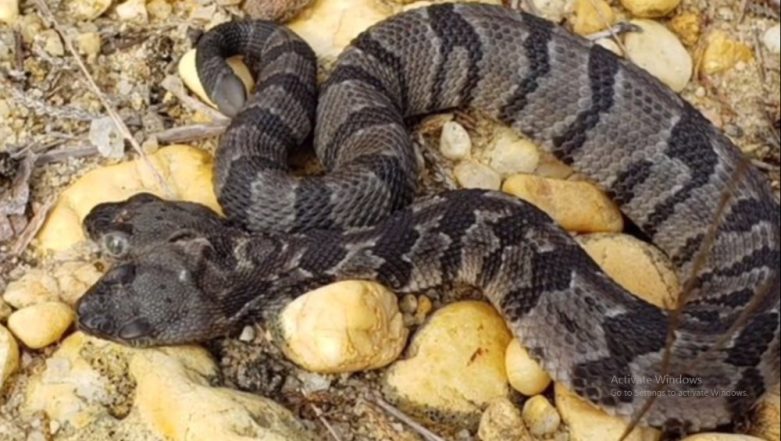 A rare two-headed baby snake has been found in a forest in New Jersey, the United States. The reptile is a timber rattlesnake named 'Double Dave'. It was spotted last month and is now being taken care of by an environmental group. The snake has two fully-formed heads, four eyes and two tongues, all of these work independently. Environmentalist Dave Schneider said that the snake stiffens when trying to escape and would have been an easy catch for predators. Rare 2-Headed Copperhead Snake Found in Kentucky Home; to Be Displayed at Wildlife Centre.

Dave was quoted as saying, "It would be pretty difficult for this snake to survive in the wild." Schneider from Herpetological Associates (HA), a consultancy specialising in the study of endangered and threatened reptiles and amphibians, said along with a colleague spotted Double Dave in the Pine Barrens forested area on August 25. While Schneider has decades of experience handling and raising snakes, however, he had never dealt with a two-headed snake before. Two-headed snakes have been reported to live as long as 15 to 20 years in captivity.

The name Double Dave comes from the name Double Dave because Schneider and his colleague are both called David. Schneider told the BBC that a special permit had been obtained from the state authorities to study the rare snake. Two-headed snakes are born the same way as conjoined twins. They develop embryo which begins to split into identical twins, but stops halfway. Last week, residents of a village in Bali, Indonesia were shocked when they spotted a two-headed snake. Experts have in the past said that two-headed snakes rarely occur in the wild and have usually been bred in captivity.