A rare yellow turtle was found in a pond in West Bengal on Tuesday. With this discovery, it is the second time, a yellow turtle has been spotted in India. The first one was found in Odisha in July. Indian Forest Service officer Debashish Sharma took to Twitter sharing pictures of the bright yellow-coloured turtle. 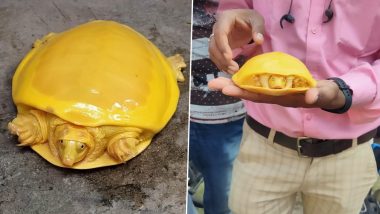 Soon, the pictures of the yellow turtle were widely shared on social media platforms. It was retweeted with people exclaiming at its colour. The IFS officer shared another image of the turtle stating that the turtle is albino which is due to Tyrosine pigment. IFS officer Ramesh Pandey tweeted saying, "This is the second incident in the recent past when Yellow Flapshell Turtle has been found. Before this one Yellow Flapshell Turtle was found in Balasore, Odisha. Still not very clear whether a new species or albinism or mutant albino." Rare Albino Seal Pup Spotted in Russia Might Get Rejected by Its Community But Internet is All Love!

It's an albino kind whose peculiar yellow colour is may be bcoz of either some genetic mutation or congenital disorder due to absence of tyrosine pigment. @SudhaRamenIFS @drqayumiitk @wiiofficial1 @moefcc @susantananda3 @mvraoforindia pic.twitter.com/Yfhdu3D06t

Residents of a village in Balasore district in Odisha who spotted a yellow turtle had handed it over to the forest department. Bhanoomitra Acharya, Wildlife Warden, was quoted as saying, "The whole shell and the body of the rescued turtle is yellow. This is a rare turtle, I have never seen one like this." People continue to share pictures of the yellow turtle on social media particularly due to its rare colour.

(The above story first appeared on LatestLY on Oct 29, 2020 09:31 AM IST. For more news and updates on politics, world, sports, entertainment and lifestyle, log on to our website latestly.com).