A gem-set turban ornament, or a sarpech, that belonged to the Sikh Khalsa commander Hari Singh Nalwa in the 19th century was among the key highlights of an auction held by Sotheby's auction house in London. 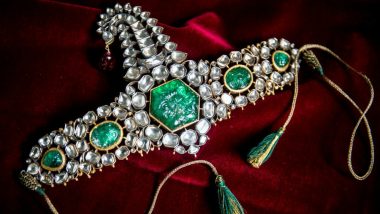 London, May 4: A gem-set turban ornament, or a sarpech, that belonged to the Sikh Khalsa commander Hari Singh Nalwa in the 19th century was among the key highlights of an auction held by Sotheby's auction house in London.

The enamelled turban ornament fetched 350,000 pounds, nearly double its estimate of up to 180,000 pounds, at the Arts of the Islamic World auction on Wednesday.

Other major Indian highlights from the sale by Sotheby's included two 17th century Mughal miniature paintings from India – ‘A Battle Outside a Walled Fortress', attributed to Sur Das, which fetched 143,750 pounds, and ‘A Drawing of Frederick the Wise', Elector of Saxony, which fetched 102,500 pounds.

The sale formed part of the Middle Eastern and Orientalist Art Week at the auction house in London, which attracted total sales of 18.7 million pounds.

"There has been a real buzz in our exhibitions over the past week, and this sense of excitement carried through into the saleroom – with enthusiastic bidding from private collectors and institutions alike," said Edward Gibbs, Sotheby's Middle East and India Chairman.

"There was a real breadth to the array of artworks on offer, reflected both in the strength of bidding and the participation of a wide spectrum of collectors from over 50 countries. Twelve new auction records were set for artists from across the region, amongst them established, indeed treasured, modern masters as well as lesser-known names that we were introducing to our collectors for the first time," he said.

The auction week witnessed an "epic auction duel" with bidders battling it out for the Venetian portrait of fabled Ottoman Sultan Suleyman the Magnificent, an artwork that encapsulates "rarity, beauty and provenance as well as embodying the cross-cultural dialogue that enriches this varied collecting category".

"It is wonderful to witness art and artists from the Middle East gaining ever wider recognition, reflecting the truly global appeal of this rewarding area of the market," Gibbs added.

A further highlight of the auction was a rare intact Iznik ‘Golden Horn' pottery dish, from the 16th century, one of the last remaining examples of the unusual style which sold for 531,000 pounds.

The auction also featured fine rugs and carpets, led by an inscribed and dated intensely golden Persian silk rug – made for Fath-ali Shah, the second Qajar emperor of Iran – which doubled its estimate to make 150,000 pounds.