An ESA Astronaut Samantha Cristoforetti made history after she posted the first-ever TikTok from the international space station. The TikTok has gone viral, and Cristoforetti is the first person ever to make a TikTok in space. 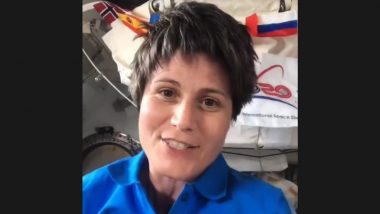 The European Space Agency (ESA) astronaut Samantha Cristoforetti has become the first-ever TikToker to post a video from the International Space Station. Cristoforetti is part of SpaceX's Crew-4 mission, which arrived at the orbiting lab on April 27 for a six-month stay. WATCH: Jordanian Math Teacher Ahmad Khalil Delivers His Math Lessons on TikTok.

"Follow me to boldly go where no TikToker has gone before," the astronaut said in the 88-second TikTok video posted on May 5. In the footage, Cristoforetti took her viewers through Crew-4's launch and introduced them to the mission's two zero-g indicators, a plush turtle named Zippy and a stuffed monkey called Etta, Space.com reported. "Etta is short for 'scimmietta', which is Italian for 'little monkey,' of course," Cristoforetti says in the video. Etta was the first plush toy that Cristoforetti bought for her daughter, Kelsey.

Back on the International @Space_Station (and TikTok) pic.twitter.com/oCgJSdWKcu

"What questions do you have about life on the space station?" she asked her audience toward the end of the video, even as she floated in front of one of the orbiting lab's windows. "Tell me in the comments. And remember: Follow me to boldly go where no TikToker has gone before." TikTok Rolls out Its New 'Friends' Tab to More Users, Replacing the Current 'Discover' Tab

Before Crew-4's launch, ESA officials noted that Cristoforetti was the first professional astronaut ever on the platform, "bringing space content and European research to a wider audience." Cristoforetti had already posted several space-explainer videos on TikTok, but Thursday's was the first one she filmed in the final frontier, the report said. Crew-4 is Cristoforetti's second spaceflight. She previously lived aboard the space station from November 2014 to June 2015.

(The above story first appeared on LatestLY on May 10, 2022 02:04 PM IST. For more news and updates on politics, world, sports, entertainment and lifestyle, log on to our website latestly.com).