Sand artist, Sudarsan Pattnaik who is known to create magical portraits and messages using sand at puri beaches, has congratulated President-elect Joe Biden and Vice President-elect Kamala Harris their historic win against Ex-President Donald Trump in the presidential elections in the United States. 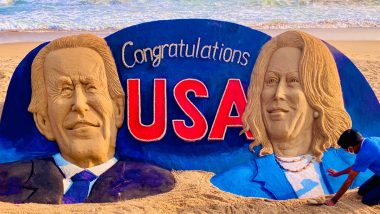 Sand artist, Sudarsan Pattnaik who is known to create magical portraits and messages using sand at puri beaches, has congratulated President-elect Joe Biden and Vice President-elect Kamala Harris their historic win against Ex-President Donald Trump in the presidential elections in the United States. He created a massive sculpture which is 25 feet-long using 10 tons of sand giving away his best wishes to on Sunday. "It is 25 feet-long sculpture and 10 tons of sand was used. I created this to congratulate the new US president Joe Biden and vice president Kamala Harris," Mr Pattnaik told news agency ANI.

Sudarsan Pattnaik says he took six hours to create the sculpture at a beach in Odisha's Puri. "We are very happy that for the first time a woman of Indian origin was elected for vice President. I would like to congratulate Kamala Harris," Mr Pattnaik said. Joe Biden Wins as US President, Donald Trump Wins With Funny Meme Reactions! Netizens Share Hilarious Jokes and Puns Celebrating The US Elections 2020 Results.

My sandart at #Puri beach in India.

Just before this, Sudarsan Pattnaik had made a sand art showcasing the neck to neck fight between Donald Trump and Joe Biden for becoming the next president of the United States. He highlighted the dilemma of millions who were waiting eagerly for the final results of US elections through sand art. In the art you could see both Donald Trump and Joe Biden face to face with a question mark between them, signifying the uncertainty. It also had the flag of the United States of America in the backdrop. Check out:

President-elect Joe Biden, defeated Trump in a closely contested election and will be the 46th president of the United States. Biden becomes the oldest elected President in the history of the US at 78. In his third attempt at the White House, Biden, a four-decade Washington figure as a Senator and then a vice president, received more than 74 million votes, four million more than Trump, and more than any other presidential candidate. Kamala Harris creates history as she becomes the first woman, Black American and Asian-American to become Vice President of the United States.

(The above story first appeared on LatestLY on Nov 09, 2020 09:00 AM IST. For more news and updates on politics, world, sports, entertainment and lifestyle, log on to our website latestly.com).