Tiger Ek Prem Katha: Here's What Happened When Kanan, a Tigress, Gave Up Her Freedom to Be in Captivity With Pradeep, a Tiger, in Odisha's Nandankanan Zoo! 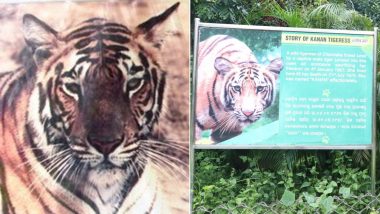 Today marks the celebration of International Tiger Day or Global Tiger Day, a day that focuses on tiger conservation. These fierce striped wild cat species are not only a magnificent animal but also the national animal of India. And it is a thing of pride that almost 70% of the world's tiger population is residing in India. So it drives more importance to make efforts for their conservation. With a diverse community of the species in different parts of the country, there are exciting anecdotes of these wild cats too. And on International Tiger Day 2020, a tiger's love story has been shared on Twitter. It's about a wild tigress named Kanan who fell in love with a caged tiger Pradeep in Odisha's Nandankanan Zoo. She gave up her freedom to be with the tiger, but the story did not end too well in her favour. Read on to know more. International Tiger Day 2020: Watch Adorable Videos of Tiger Cubs That Revive Hope For the Species.

IFS office Sandeep Tripathi shared the bits of this tiger's love story on Twitter. The story is from 1967, when a tigress named Kanan jumped into a zoo enclosure of Pradeep the tiger. Kanan was lured by Pradeep and sacrificed her open space living to be in captivity with Pradeep. It was an open-air enclosure, and Kanan jumped right in. However, Pradeep was already with a companion and was not fond of Kanan. The officials back then tried to pair up Kanan for other mates, but she did not accept. She lived as a celibate till her death on 21st July, 1978. The Nandankanan zoo in Odisha immortalises the tale of Kanan and has put up a billboard which tells the story of Kanan. International Tiger Day 2020: From ‘Which Countries Have Tigers?’ to ‘Where Are Tigers Native to?’ Most Frequently Asked Questions About Wild Cats Answered.

On this day would recapitulate the unique love of wild tigress “Kanan” jumping from freedom to the captivity of open-air enclosure of Zoo tiger “Pradeep” in the night of 4th January 1967 lured by love.Unique take in the Zoos of world🐅......1 pic.twitter.com/ppHkBYRylZ

However, Pradeep would not accept her, as he has his own female companion “Sikha”. “Kanan” would celibate till her death on 21st July, 1978 without accepting any other mate. The “Kanan square” in Nandankanan immortalizes this iconic love story....2 pic.twitter.com/sBwpMRS3GM

Fascinating, yet tragic. Something similar was observed years later too, when a male tiger named Nandan this time jumped in from the wild for a tigress Megha. This time the two did mate and gave birth to three cubs. As humans, we always look up to the love-filled stories of fellow humans but it is interesting to learn how animals too can make sacrifices and pose a strong feeling of love for their partner of choice.

(The above story first appeared on LatestLY on Jul 29, 2020 01:12 PM IST. For more news and updates on politics, world, sports, entertainment and lifestyle, log on to our website latestly.com).