Trying to Cross a Railway Crossing? This Man Tried to Do That and Had His Bike Crushed Under a Train While He Had a Narrow Escape! Watch Video

Journalist Rajendra B. Aklekar shared the scary footage on Twitter. It shows a man attempting to cross the railway tracks, even though the barricade was closed. He jumped off the bike, which got crushed by the speeding train and left into pieces. 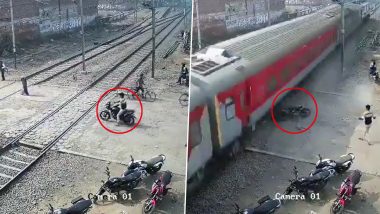 Close call for this man who nearly escaped from facing a frightening accident. The fault was his own! At railway crossings, we often see, people, disobeying the rules. Such violation can lead to severe accidents, or in worst case, death. Trains have a much larger mass relative to their braking capability and thus a far longer braking distance than road vehicles. With rare exceptions, trains do not stop at level crossings and rely on vehicles and pedestrians to clear the tracks in advance. But people in a rush, often try to cross hurryingly, when the train approaches. A man attempted to do the same. He was saved, but his bike was crushed and left into pieces as the speeding train moved past. Video of Speeding Truck Hitting Railway Crossing Near Madhya Pradesh's Sagar District Goes Viral.

Journalist Rajendra B. Aklekar shared the horrifying footage on Twitter. It begins with people at the railway tracks, crossing even when the stop barricade on railroad crossing was closed. Two-wheelers can be seen crossing the tracks, with pedestrians walking near the tracks. The man in video attempted to do the same, but quickly put the brake which caused the vehicle to slow down. However, he could not control it. As a result, he jumped off the bike, which got crushed by the speeding train and left into pieces.

It is not clear as to where the mishap took place. The video earned thousands of views, with commentators stressing on the importance to follow the railway crossing rules. Hopefully, the biker learnt his lesson and will wait patiently, the next time he is at the railway crossing and the barricade is closed.

(The above story first appeared on LatestLY on Jan 28, 2021 01:03 PM IST. For more news and updates on politics, world, sports, entertainment and lifestyle, log on to our website latestly.com).