A video of blue whale pooping has gone viral on social media. While that may sound like a disgusting sight to watch, this looks simply stunning. 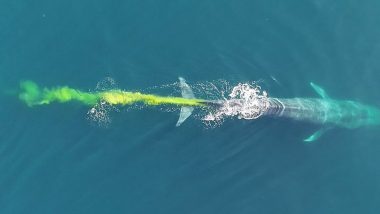 A video of blue whale pooping has gone viral on social media. While that may sound like a disgusting sight to watch, this looks simply stunning. The whale was seen emptying its bowels off the coast of Australia. Landscape photographer Ian Wiese was recording at Point Picquet, south of Perth when he captured the sight. He was with a whale monitoring team who record mammals as they go towards cooler waters. The blue whale had migrated south along the Western Australian coastline. The clip shows the whale leaving behind a trail of a yellow powdered line as it swims across. Endangered Whale Shark, the Largest Fish on Earth, Spotted off Florida Coast; Check Pics and Videos.

Ian told Daily Mail, "We noticed some blue whales 2km out from shore and I had just located the whale when he started doing its business. We have filmed it happening on some other occasions – but never with the bright yellow poo – it was quite surprising." He also said that generally whale poo is 'pinky-red colour' but the yellow excrement has left a streak in the ocean. He also that the poop indicated that the whale had eaten in the past 24 hours.

Blue Whale Takes a Dump Leaving Behind a Yellow Trail:

It would have fed on krill somewhere off Perth as it swam from Indonesia to Victorian and South Australian border. He added, "It's really quite important to have this sort of footage for the understanding of the life – they're still critically endangered." Curt Jenner of the West Australian Centre for Whale Research told the ABC that blue whales can release up to 200 litres of poo with each bowel movement. He added, "Their poo is a key nutrient for the ocean environment, which essentially creates "pastures" for small fish and krill to feed on. It also helps create the all-important algae that are the source for all marine life."

(The above story first appeared on LatestLY on Nov 19, 2019 11:26 AM IST. For more news and updates on politics, world, sports, entertainment and lifestyle, log on to our website latestly.com).