The Village Cooking Channel has made its fans proud by achieving YouTube's Diamond Play Button recently. They have also shared an unboxing video on their channel. 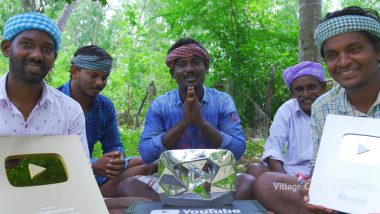 The popular Village Cooking Channel has been awarded with YouTube Diamond Play Button after crossing the 10 million subscribers milestone mark. With this, they became the first YouTube channel from South India to achieve the Diamond Play Button. In the world of technology, where internet facilities are at an all-time high, this Village Cooking Channel has become the owner of a multi-million dollar for garnering millions of views on their cooking videos and for crossing millions of subscribers. A group of six people from Pudukkottai, Tamil Nadu, run the cooking channel.

The proud owners of the YouTube channel have also donated Rs. 10 Lakh to Tamil Nadu CM MK Stalin's COVID-19 Relief Fund. They have not only attracted millions of fans but also became the first Tamil YouTube channel to cross one crore subscribers. The group of enthusiastic people divide their time between farming and running YouTube channel! For six months, their focus is on agricultural activities, while the other half of the year goes into running the successful 'Village Cooking Channel'.  They have become widely popular for cooking mouth-watering recipes such as Arabian mutton biryani, liver biryani, brinjal curry, mutton biryani, boneless fish pepper fry, goat biryani and so on.

The group recently posted the Diamond Play Button unboxing video on their YouTube channel.  The excited 'YouTubers' have also thanked their fans and subscribers in the video.

Several netizens have been pouring in congratulatory messages on Twitter for their great achievement and humanitarian aid. Take a look:

Here's How Success Can Be Achieved

talent we have and the current technology in the world Another example of how #success can be achieved when used together.

The day started with the news of #VillageCookingChannel making it to 10M subscribers.

This video got me teary-eyed a bit, and at 6:28, it was just so emotional.

May God bless these genuine souls who are helping people in need. https://t.co/en8XtgrYTh

Congratulations for Making it Big

Congratulations for making it big, reached 10 Million Subscribers in #Tamil YouTube. You have earned all the praises you are now receiving.@vstamilan and team.#VillageCookingChannel pic.twitter.com/LRfhktTXOc

The group of six people of the Village Cooking Channel have been also distributing food prepared from their grand recipes amid the coronavirus pandemic. They had started the channel on YouTube in 2018.

(The above story first appeared on LatestLY on Jul 05, 2021 12:30 PM IST. For more news and updates on politics, world, sports, entertainment and lifestyle, log on to our website latestly.com).