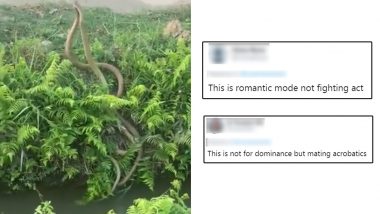 Snakes can be fascinating creatures, although they give many people the creeps. While the sight of these reptiles can often freak out people, there are some interesting video clips that tell you more about the habitat and living of these reptiles. A video of two male snakes fighting for dominance has been shared on Twitter, but the netizens believe otherwise. In the video, there are two snakes who appear to be entangled and dancing together, a behaviour that is common of snakes while they mate. But are they actually mating in the shared video? Maybe not. Video of Two Snakes Dancing in Golf Course Leaves Netizens Confused if They Are Mating or Fighting.

IFS officer Susanta Nanda who shares interesting videos from the wild, posted a clip of two rat snakes. According to his caption, "Rat snakes combat for dominance. Two male fighting to define their territory & defend their mate." The video shows two snakes entangled and scaling up to each other. One of the snakes is more actively moving compared to the other. For a bystander or as a viewer it appears that they are dancing. Netizens say that this is not a fight of dominance but it is actually a couple of rat snakes mating! Pythons Mating on Rooftop in Cairns Crash Through Ceiling Due to Their Weight (View Pics).

People commented that this is a romantic act and not a fight. Check some reactions:

But we know this as romantic act of couple. I have seen lot many times.

This is romantic mode not fighting act

The snakes are not fighting for dominace, They are actually a male- female couple and trying to make each other happy during love. This mating activity might take hours. This is their natural behaviour for love and copulation...

Hope your doubt is clear....

Others have also called it an act of love. So what exactly is happening? If you search for mating of rat snakes, you will get videos which show similar behaviour of the snakes. We found one video of rat snake combat which explains why the two snakes appear to be fighting. Something similar was seen last month in a woman's garden.

Watch the Video of Ratsnakes Fighting:

In snakes, the males are driven by the smell of the females. The males then have to establish their dominion and mark the territory as who will copulate with the female. So what looks like a mating dance-off can also be ritual combat between two males. Given that the snakes in the video are two males, then it is a combat fight for dominion and not a mating dance.

(The above story first appeared on LatestLY on Jul 31, 2020 05:29 PM IST. For more news and updates on politics, world, sports, entertainment and lifestyle, log on to our website latestly.com).