The rap anthem effortlessly blends music and sport -- two of the biggest cultural unifiers of the country. 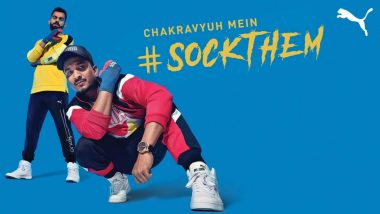 Bengaluru, May 31: Leading the cricket frenzy, sports brand Puma launched its biggest campaign for the season -- Sockthem, featuring Indian captain and Puma ambassador Virat Kohli along with Divine, the country's biggest hip-hop star. The campaign takes inspiration from the skipper's iconic moment at the Sydney Cricket Ground, where he made a statement by gesturing that he "lets his bat do the talking". Sockthem is a platform that aims to give Indian cricket fans all the ammunition they need to support the Men in Blue, with a rap anthem and a symbolic gesture. As Virat Kohli & Men Battle for CWC 2019, Indian Fans Spotted With Unique Hairstyles As World Cup Fever Soars (See Pics).

Much like cricket, music speaks to everyone and is embedded in the fabric of society. The rap anthem effortlessly blends music and sport -- two of the biggest cultural unifiers of the country. Honouring Virat's sportsmanship, Divine perfectly captures the crossover between music, art and culture and how cricket transcends everything in India. The music video will also see other Puma brand ambassadors like Sushma Verma, Indian national woman cricketer, and Mary Kom, Indian Olympic boxer express their support for the team.

Speaking on the development, Kohli said: "I always look to push my limits and challenge myself on and off the field. I am super excited to be part of this rap anthem, and I had a great time working with Puma and Divine on the campaign."

The man behind the Sockthem track, Divine added: "This was one of the most unique projects I have worked on and I am super excited to have played such an integral role in the campaign. India has a special love for cricket, and I'm thankful to Puma for giving me an opportunity to compose and perform an anthem for Indian cricket fans worldwide."

(The above story first appeared on LatestLY on May 31, 2019 03:38 PM IST. For more news and updates on politics, world, sports, entertainment and lifestyle, log on to our website latestly.com).