What Is Blackpink Rosé’s Net Worth? As the K-Pop Queen Becomes Tiffany & Co.’s Newest Ambassador, Know More About the Korean Billionaire

Rosé—the K-Pop queen became the new face of Tiffany & Co. The singer’s first campaign with the American luxury jewellery brand is called the HardWear campaign. She is one of the wealthiest K-Pop idols. What’s Rosé’s net worth? Find out! 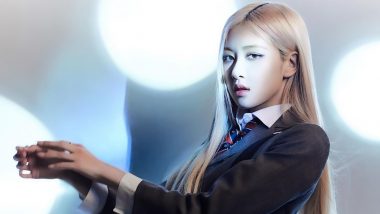 Blackpink—one of the most successful K-pop girl bands of all time, is ruling the world with their enchantments. Period! Jennie, Rosé, Jisoo and Lisa are Blinks' hearts, and they always come up with unique and fun ways to stay close to their fans. Ever since they dropped their first single in 2016, their career has gone from strength to strength. Not only have the girls evolved as a K-Pop group, but also as an individual. Each member enjoys a massive fan followers, and some biggest deals and endorsements. But here, we will talk a little more about Rosé—the K-Pop queen who just became the new face of Tiffany & Co. The singer’s first campaign with the American luxury jewellery brand is called the HardWear campaign. She is one of the wealthiest K-Pop idols. What’s Rosé’s net worth? As she becomes Tiffany & Co.’s newest ambassador, know more about the Korean billionaire.

According to Vogue Australia, Rosé was first introduced to the K-Pop fans through her guest appearance in labelmate G-Dragon’s 2012 track ‘With You.’ She officially made her debut as quartet Blackpink in 2016, with co-stars Jennie, Jisoo and Lisa. Rosé’s solo activities reportedly started in 2017, when she appeared in the Korean variety show, ‘King of Mask Singer.’ Aside from music, she is also the face of several fashion and cosmetic brands. But a brand ambassador of American luxury jewellery, Tiffany & Co.—this makes to a list of A-listers like Lupita Nyong’o, Elle Fanning and more. Reports add that Rosé wears the HardWear collection’s modern 18-karat yellow and rose-gold links, set with diamonds, for the campaign.

The New Zealand-born singer migrated with her family to Australia and lied in Melbourne until 2004. She relocated to Seoul the following year after being scouted by YG Entertainment. After months of anticipation, Rosé made her solo debut earlier this year with the single On Ground. The debut album, R. On The Ground became the most-viewed video by a South Korean solo artist in 24 hours on YouTube.

She is also the face of several famous fashion and cosmetic brands, including South Korean cosmetic brand Kiss Me. She also makes a variety of show appearances. According to Celebrity Net Worth, Rosé has a net worth of over 11.3 billion Korean won (USD 10 million). Her wealth mostly comes from endorsement deals, album sales, concerts as one-quarter of Blackpink and a few more.

Blackpink is considered one of the biggest names in music at the moment. With each passing day, their massive fan following is only growing, and so their international stardom. More power to the girls!

(The above story first appeared on LatestLY on Apr 23, 2021 05:43 PM IST. For more news and updates on politics, world, sports, entertainment and lifestyle, log on to our website latestly.com).