Happy International Women’s Day 2021! From BLACKPINK to TWICE, 5 Phenomenal Girl Groups Who Redefined Womanhood in K-Pop With Their Skills

While BLACKPINK took Coachella by storm in 2019, TWICE sold 100,000 online concert tickets amid the pandemic. In order to celebrate International Women’s Day 2021, here we bring you five phenomenal girl groups who redefined womanhood in K-Pop with their skills. 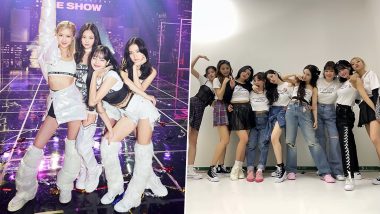 Make way for the ladies, K-Pop stans! It’s International Women’s Day 2021, today, March 8, and there could not have been any better time than celebrating the achievements of some of the most phenomenal K-Pop girl groups who are ruling the world with their accomplishments. Even if you are a casual South Korean music genre fan, you how the K-Pop girl groups often targeted by misogynists, who never wait for any opportunity to spew hatred against them. While the seven young men of BTS may have paved the way, these K-Pop girl bands are no less, creating newer milestones and opening opportunities for many who dream of being in the music industry. While BLACKPINK took Coachella by storm in 2019, TWICE sold 100,000 online concert tickets amid the pandemic. These women are doing it all with confidence, strength and flair. In order to celebrate International Women’s Day 2021, here we bring you five phenomenal girl groups who redefined womanhood in K-Pop with their skills.

Fresh from their Coachella debut, the four women of Blackpink—Jisoo, Jennie, Rosé, and Lisa dominate the stage life four Beyonce, totally devoid of any aegyo (cute expressions), that has long characterised K-Pop girl groups. Their popularity is now known to all, and they currently enjoy a massive fan following from around the world.

With no denial, Red Velvet maintains a streak of independence that rejects being mere objects of desire, and wear feminism proudly. They continue to rule, never apologising for their belief in gender equality. So, what are you waiting for? Go ahead and dedicate your Women’s Day celebration, listening to the soulful voices of Irene, Yeri, Joy, Wendy and Seulgi.

In any mention of K-Pop, global expansion would be empty without Wonder Girls. Despite line-up changes and member departures, Wonder Girls were a consistent presence on charts with their retro-inspired music. Fans find comfort in their songs. Besides, Sunmi has her own massive following, who received an amazing response after going solo on US tour.

Twice is the first K-Pop girl group that earned Platinum certification by the Recording Industry Association of Japan, for both album and CD single. They are one of the most prominent groups in K-Pop and loved around the world for their fun and fresh music. In fact, in the pandemic world, they managed to sell 100,000 online tickets, creating another milestone for K-Pop girl groups.

Loona is cultivating an entirely new kind of diverse fanbase. They have garnered attention for their themes of LGBTQ+ topics. With songs and music videos, that appealed to the aesthetics of same-sex attraction, intricate choreography that puts them on par with their male counterparts, and an inclusive concept that allows them to represent every girl, the girl group surely have much more to give to their fans.

Before you think of it all, note that this is just the beginning of a rising girl group dominance in the K-Pop genre and we named a few. The women of South Korean pop are increasingly charting their own course with greater independence than ever! So, Happy International Women’s Day, K-Pop stans!

(The above story first appeared on LatestLY on Mar 08, 2021 12:16 PM IST. For more news and updates on politics, world, sports, entertainment and lifestyle, log on to our website latestly.com).