The company fulfilled a special request from a four-year-old. Zomato delivered a toy car to the little one who messaged them for gifts. The father took to Twitter to share the wonderful piece of news and the internet is once again in love with the service. 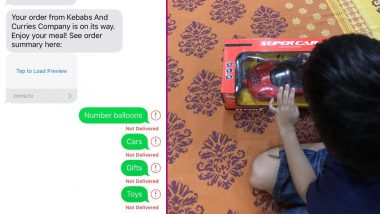 Food-delivery service Zomato has learnt how to win the hearts of people. Their social media account has been in the news for the right reasons over the past few weeks. This time, the company decided to go out of their way for a special request from a four-year-old. A little boy messaged the Zomato delivery number from his father's phone asking for toys, balloons and some gifts. Little did he know, Zomato would actually send him a toy car. The father took to Twitter to share the wonderful piece of news and the internet is once again in love with the service. Zomato Delivery Guy Aka ‘Roll Kaku’ From Kolkata Feeds Poor Kids With Cancelled Orders, Wins Hearts Everywhere.

A Twitter user named Irshad Daftari shared a screenshot of his son's messaging the Zomato food delivery number. His four-year-old son asked them for number balloons, cars, gifts, toys. All of these messages were undelivered, since it was the invalid number. While people on Twitter were already amused with the child's innocence, some started tagging Zomato in the comments. Zomato took the special request and actually sent out a toy car to the little boy. Zomato Customer Refund Query Gets 'Maa Kasam, Milega Refund' Response, Reddit Goes Crazy.

In other news, my 4 year old son thinks that if he messages Zomato with his fav things, they might deliver them to him 😍❤️ pic.twitter.com/K5g65L0rlF

UPDATE: By special delivery from the good, nay, GREAT, people at @ZomatoIN the 4 year old has got the best surprise ever! Has been running around the house with his gift while his 8 month old sister plays with the wrapping paper. Happiness all around 😍😍😍 pic.twitter.com/bYwSSAbQPU

The toys did not just make the little ones happy but the netizens are loving it too!

This is Zomato Gold!

@Zomato you continue to win hearts! This is brilliant. 🤗

The internet folks are mighty impressed with Zomato giving the best surprise. Just a week ago, Zomato was in the news for giving a befitting reply to a bigot who cancelled the food order from a Non-Hindu delivery guy. At that point, when the customer put it up online, Zomato's replied, "Food doesn’t have a religion. It is a religion." The incident was lauded online and the customer was also arrested later on. And once again, Zomato has won hearts of the internet again.

(The above story first appeared on LatestLY on Aug 09, 2019 02:13 PM IST. For more news and updates on politics, world, sports, entertainment and lifestyle, log on to our website latestly.com).