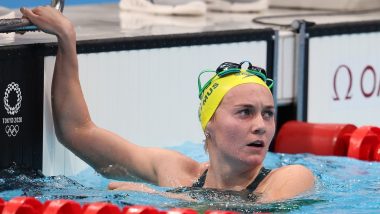 Canberra, May 23: Australian swimming superstar Ariarne Titmus has broken the women's 400m freestyle world record at the national championships, according to Swimming Australia. Titmus, the reigning Olympic champion over 200 and 400m, on Sunday night finished the 400m freestyle in 3:56.40, breaking the previous world record set by American Katie Ledecky in 2016 by 0.06 seconds. Andrew Symonds’ Memorial Service To Be Held on May 27.

"I'm just really happy," Titmus, 21, said after the race, reports Xinhua. "I thought that if I went out there and did the best race I could with how I'm feeling, the world record was definitely within my reach." Titmus's world record is the latest chapter in her burgeoning rivalry with Ledecky, whom she beat in the 400m final at the Tokyo Olympics. On the same day, Titmus paid tribute to Ledecky, describing the American as the greatest female swimmer of all time. "I can't put myself up next to her. What she has done for female swimming has been insane: she's been at this level for 10 years," Titmus said. India vs Pakistan Live Score Updates: Get Full Commentary of IND vs PAK Men’s Hockey Match at Asia Cup 2022.

"I hope now this is going to keep the battle going -- give her some drive, and hopefully, we can see how much faster we can keep going." With the conclusion of the Australian Swimming Championships, which was held in Adelaide from last Wednesday to Sunday, Swimming Australia announced that Tokyo gold medallists Kaylee McKeown and Zac Stubblety-Cook are among a host of Australian swimming stars set to headline the team for the upcoming FINA World Championships. The governing body selected a team of 39 for next month's meet in Budapest, among them, 11 are going to make their national team debut. "These World Championships are the first step on the path to Paris and I have no doubt our Dolphins will continue to set the benchmark on that journey," said Swimming Australia CEO Eugenie Buckley in a media release.

(The above story first appeared on LatestLY on May 23, 2022 05:04 PM IST. For more news and updates on politics, world, sports, entertainment and lifestyle, log on to our website latestly.com).