David Warner Not Looking to Sledge Virat Kohli During India Tour of Australia 2020–21, Says ‘No Point in Poking the Bear’ 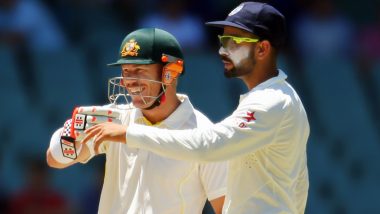 The Australian cricket team is known for their fierce nature and tendency to get under the skin under the skip of opposition. In fact, there are many stories of Aussie cricketers tormenting the opposition players through sledging. However, the aggressive nature of Aussie player has always brought out the best of Indian skipper Virat Kohli and owing to the fact, many Aussie players like Matthew Wade and Pat Cummins said that they will not be sledging the Indian skipper during India Tour of Australia 2020-21. In a recent interaction, swashbuckling Australian opener David Warner also made a similar comment as he said that engaging in a verbal battle with Kohli will be like poking a bear. David Warner ‘Very Sure’ of Participating in Indian Premier League if It Gets Replaced by ICC T20 World Cup.

“Virat Kohli is not a person to be poked and no point poking the bear,” Warner was quoted as saying by India Today. On some previous occasions, Kohli and Warner have got involved in on-field arguments. However, the latter seems to have changed his approach after making a comeback onto the field after facing a one-year ban post the infamous sandpaper-gate scandal.

Owing to his ban, Warner, along with Steve Smith, wasn’t able to participate during India’s last Tour of Australia 2018-19. The visitors outplayed the home team throughout the tour and clinched the ODI and Test series by 2-1 while the T20I series was tied at 1-1. Warner admitted that India were a better side last time around. However, the contest will be different this time.

“It would be very surreal playing against India without the crowd. I want to be selected and be part of that series. Last time we were not bad but we were beaten by a good team and their bowling was relentless. Now, India has got the best batting line up and our bowlers will like to target and the Indian crowd will be eager to see that,” the southpaw added.

(The above story first appeared on LatestLY on Jun 21, 2020 01:07 PM IST. For more news and updates on politics, world, sports, entertainment and lifestyle, log on to our website latestly.com).