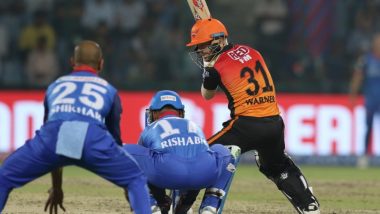 Abu Dhabi, September 28: The Shreyas Iyer-led Delhi Capitals (DC), high on confidence after two wins on the trot, will be up against SunRisers Hyderabad (SRH), the only team without a point, in the 11th match of the IPL here on Tuesday. While DC will aim for a hat-trick of wins, the David Warner-captained SRH would aim to register their first win of the season, having lost two of their previous outings against Royal Challengers Bangalore (RCB) and Kolkata Knight Riders (KKR).

In their first game against Kings XI Punjab (KXIP), which went into the Super Over, Marcus Stoinis and Kagiso Rabada ensured a win for DC before they comprehensively defeated a star-studded Chennai Super Kings in the next match. In batting, the DC top-order comprising Shikhar Dhawan and Prithvi Shaw will look to lay the foundation of a big total. While Shaw looks in good nick with the willow, Dhawan is dish out something special. Delhi Capitals vs Sunrisers Hyderabad Betting Odds and Tips: Free Bet Odds, Predictions and Favourites in DC vs SRH Dream11 IPL 2020 Match 11.

Rishabh Pant and Iyer have also been in fine form. While the duo rescued DC after a top-order collapse against KXIP, they also chipped in with valuable contributions against CSK. Also, Aussie all-rounder Marcus Stoinis has proved his worth both with the bat and the ball and is expected to come up with late fireworks with Shimron Hetmyer.

In the bowling department, the South African pace duo Kagiso Rabada and Anrich Nortje have looked sharp so far. The DC team management will just hope Nortje to be a bit economical like his compatriot.

In the absence of ace spinner Ravichandran Ashwin, who is recovering from an injury, Axar Patel and Amit Mishra have performed decently well and they are once again likely to share the spin workload. Ashwin suffered an injury in their game against Punjab and his inclusion in the playing XI remains doubtful.

On the other hand, SRH will have to address their batting woes as barring skipper Warner, Jonny Bairstow, and Manish Pandey, the other have failed to perform. The 2016 champions need an explosive batter like Stoinis, Keiron Pollard and Andre Russell in the middle-order and in a move to strengthen it, the SRH team management might include Kane Williamson, replacing Afghanistan off-spinner Mohammad Nabi.

In their bowling department, Bhuvneshwar Kumar will once again lead the pace attack. However, the 30-year-old hasn't been close to his best so far. He cannot be judged on the basis of just two games, but the pacer needs to find his rhythm as soon as possible. He would need support from Sandeep Sharma and Khaleel Ahmed. Rashid Khan will once again spearhead the spin attack and a lot will depend on how the Afghanistan spinner performs as he is capable of changing the outcome of a game.

(The above story first appeared on LatestLY on Sep 29, 2020 12:00 AM IST. For more news and updates on politics, world, sports, entertainment and lifestyle, log on to our website latestly.com).