Did Pakistan Withdraw Naseem Shah from ICC U19 Cricket World Cup to Avoid Another Age-Fudging Row? 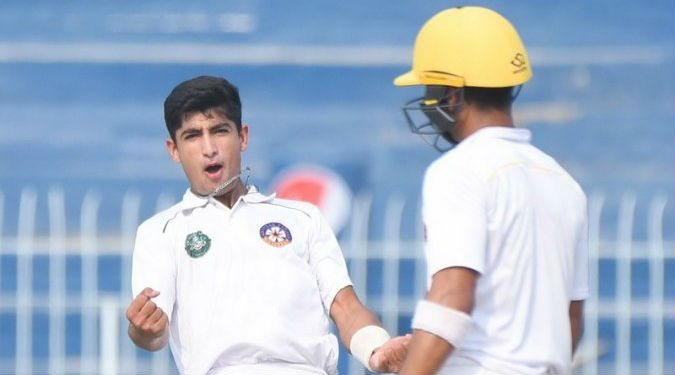 Lahore, January 7: The Pakistan Cricket Board (PCB) decision to withdraw young pace sensation Naseem Shah from the under-19 squad for the upcoming World Cup could likely be to avoid another controversy regarding the actual age of the cricketer. Shah had been withdrawn from the World Cup scheduled to be played in South Africa from January 17 to February 9. In an official statement, the Pakistan Cricket Board (PCB) announced that Mohammad Wasim Jnr has been named as Shah's replacement. Despite being selected in the U-19 World Cup squad, the pacer was later included in Pakistan's national team which toured Australia in November-December 2019 for a two-Test series where Shah had hogged the limelight after some impressive show. Naseem Shah Real Age Row: Mohammad Kaif Takes a Sneaky Dig at Pakistan Youngster, Says 'He Is Aging Backwards'.

However, during the tour Down Under, questions over Shah's age were raised in the international media before the PCB categorically denied all such reports. A tweet from Pakistan journalist Saj Sadiq had surfaced on social media dated December 1, 2018 which read: "Highly rated 17-year-old pace bowler Nasim Shah who was signed by Quetta Gladiators for the Pakistan Super League has suffered a back injury. He is back in training and hopes to be fit for PSL4 #Cricket #PSL4." On Monday, another development took place in the matter as reliable sources told Pakistan's national daily -- The Dawn -- that despite defending the age of Shah, the PCB had initiated an investigation at its own level after the Australia tour. Naseem Shah Now Member of Senior Pakistan Team, Shouldn’t Be Demoted: Ijaz Ahmed.

"Sources said that PCB's doctors in their reports could not ascertain Shah's exact date of birth because they are of the view that no reliable scientific way is available to determine that while no international sporting bodies recognizes bone test as the authentic parameter to decide any player's age," reported the Dawn. "An official of the junior team's management on the condition of anonymity told Dawn that Nasim's presence in the team would have been more beneficial for Pakistan to win the tournament. But he said senior team head coach Misbah and bowling coach Waqar preferred to work with him at home before the home series against Bangladesh, although currently, it was in doldrums," it added.

However, a PCB spokesman said it was a routine practice to conduct an inquiry regarding Shah's age. Ijaz Ahmed, head coach of the Pakistan U-19 team, had said that the decision to withdraw Naseem from the upcoming World Cup did not hurt him, insisting that the right-arm pacer is now a member of the senior team and should not be demoted. Shah has so far played three Tests for Pakistan in which he has taken eight wickets.

Pakistan, the 2004 and 2006 champions and three-time runners-up of the U19 World Cup, are placed in Group C of the 16-team event and will play Scotland in their opening match on January 19.