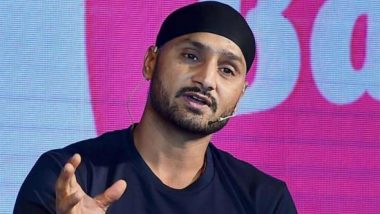 Veteran Indian off-spinner Harbhajan Singh recently took to his official Twitter account and expressed shock over receiving a heavy electricity bill of INR 33,900. In fact, the 2011-World Cup winner even said that his latest bill is seven times more than what he usually pays. The Chennai Super Kings- star also took a dig at his electricity provider- Adani Electricity- and sarcastically asked if he has been charged for his whole colony. Notably, Harbhajan is not the first one who has faced unexpected electricity bills in recent times. Not too long ago, Bollywood stars like Taapsee Pannu and Vir Das also took to social media and slammed their providers for charging heavy electricity bills. Taapsee Pannu Complains About High Electricity Bill in June.

Meanwhile, Harbhajan’s next assignment is set to get underway with the start of Indian Premier League 2020 where he represents Chennai Super Kings (CSK). IPL governing council chairman Brijesh Patel recently announced that the T20 tournament will begin on September 19 while the finals will be played on November 8.

However, Harbhajan could go UAE shortly as Chennai Super Kings are reportedly planning to reach the venue in the second week of August. Hence, the talismanic off-spinner will certainly get a lot of time to assess the conditions. Also, the pitches in UAE favour the spinners and with the ground being big, Harbhajan could well make a mark in the forthcoming season.

(The above story first appeared on LatestLY on Jul 27, 2020 04:10 PM IST. For more news and updates on politics, world, sports, entertainment and lifestyle, log on to our website latestly.com).