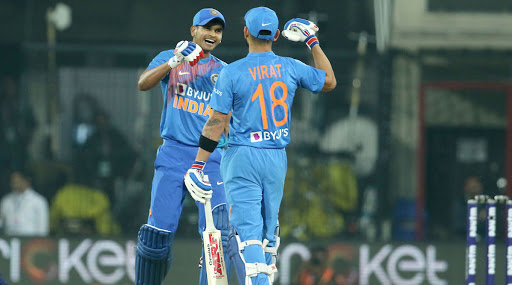 India were dominant in their display as they defeated Sri Lanka by seven wickets in the 2nd T20I match of the series. After electing to bowl first, the hosts were brilliant in their bowling department from the get-go as they continued to pressurize the Sri Lankan batting line-up. Young pacers Shardul Thakur and Navdeep Saini were brilliant as they took five wickets between them while KL Rahul and skipper Virat Kohli played brilliant knocks to get India over the line. Twitter was impressed with the home sides’ dominant performance and praised the ‘Men in Blues’ for their efforts on social media. Most Runs in T20Is: Virat Kohli Becomes Leading Run-Scorer in T20 Internationals, Leaves Rohit Sharma Behind During IND vs SL 2nd T20I in Indore.

India made easy work of Sri Lanka as they chased down a target of 143 runs with seven wickets to spare. Virat Kohli sealed the victory in one of the most memorable ways as the Indian skipper smashed Lahiru Kumara for an epic six to bring the match to an end. Kohli also reached a brilliant milestone as he became the fastest player to reach 1000 T20I runs as a captain. Jasprit Bumrah made his comeback to the international cricket as he played his first match for India since September 2019. The 26-year-old had a special night on the field as he became the joint highest wicket-taker for India in T20Is along with Ravichandra Ashwin and Yuzvendra Chahal. Shardul Thakur was also at his absolute best as the pacer took three wickets in one over as he dismissed Dhanajaya de Silva, Isru Udana and Lasith Malinga. Shardul Thakur Scalps Three Wickets in One Over During India vs Sri Lanka 2nd T20I 2020.

Saini's potential is the only thing that India hopefully has realised from this match.

Besides that, this series is absolutely useless #INDvsSL

The next T20I clash between the teams will be played on January 10, 2020, at the Maharashtra Cricket Association Stadium in Pune. The visitors will be hoping to put a put on a better performance in the final game and end the series on level terms.