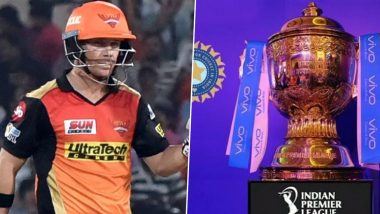 David Warner is excited for IPL 2020. The dashing Australian opening batsman, who will captain Sunrisers Hyderabad in the 13th edition of the Indian Premier League, recently posted an image of the IPL trophy on his Instagram page and asked his fans who will be winning the tournament this year. Warner had earlier expressed his concerns about risking his family to play cricket amidst the pandemic, but it seems the 33-year-old is excited about the franchise league. Warner led Sunrisers Hyderabad to their maiden IPL title in 2016 after beating Royal Challengers Bangalore in the final. IPL 2020 Players Update: David Warner, Ben Stokes, Steve Smith, Other England and Australian Cricketers to Miss First Few Matches of Indian Premier League Season 13?

Warner took to Instagram and uploaded an image of the coveted IPL trophy and asked his fans “Who’s winning this years @iplt20 @sunrisershyd 😜😜 Thoughts!!” Fans were quick to respond to the Australian. Some asserted with full confidence “of course Sunrisers.” But as always fans of Chennai Super Kings haunted Warner’s Instagram page and commented that CSK will win this year. IPL 2020: Steve Smith Praises Rajasthan Royals Team-Mate Ben Stokes Ahead of Indian Premier League 13.

IPL 2020 will be played in the United Arab Emirates (UAE) this year due to the coronavirus pandemic. This will be the second time UAE will be hosting the Indian T20 franchise league after 2013. The tournament will begin on September 19. The final will be played on November 8. All eight teams are planning to travel to UAE a month prior to the tournament start so that they can prepare and also host the pre-tournament camp there.

(The above story first appeared on LatestLY on Aug 01, 2020 05:38 PM IST. For more news and updates on politics, world, sports, entertainment and lifestyle, log on to our website latestly.com).