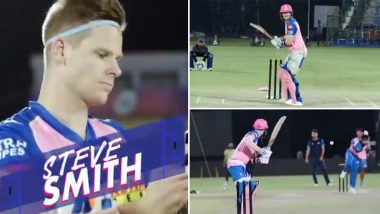 Steve Smith smashing sixes is a common sight in the Indian Premier League. The Australian batsman leads the Rajasthan Royals in the IPL and has been their talismanic player for three seasons and will also be captaining the Royals in IPL 2020. With season 13 of the IPL soon to hit the ground running, fans are already excited. On Wednesday, Rajasthan Royals shared a throwback video clip of Smith smashing the bowlers during a net session. The video is from last season but fans will be delighted into getting a glimpse of what the Australian and their skipper is capable of when on song. IPL 2020: Rajasthan Royals Continue Preparations for Indian Premier League Season 13 in Nagpur.

In the clip. Smith can be seen batting during a net session of the Royals. Initially, he fails to properly connect with the ball. But once he gets the timing, the 31-year-old is seen smashing all bowlers out of the park. “Caught a big one in the nets,” Rajasthan Royals captioned the short video clip along with a winking face emoji. Royals fans certainly loved the video and praised the Australian for his classic batting. “A treat to the eyes,” wrote one fan in the comments. IPL 2020 Update: Have No Reason Not to Go if Everything Gets Ticked Off, Says Glenn Maxwell.

'Treat to the Eyes'

Treat to the eyes 🤩🤩

Meanwhile, IPL season 13 is expected to start on September 26 and will reportedly end on November 7. The tournament will be held in UAE this year due to the coronavirus pandemic.

IPL Governing Council chairman Brijesh Patel has already confirmed, according to various reports, IPL 2020 will be played in UAE. An official announcement on the same is also expected soon after the next IPL GC meeting. Mumbai Indians are the defending IPL champions. They beat Chennai Super Kings by 1 run in the final last season.

(The above story first appeared on LatestLY on Jul 22, 2020 08:31 PM IST. For more news and updates on politics, world, sports, entertainment and lifestyle, log on to our website latestly.com).