Deepak Chahar seemed to have dismissed Shahrukh Khan via LBW. After not getting the favourable decision from the umpire, a confident Chahar went straight to MS Dhoni and asked to review, but the CSK skipper turned down his plea. In the post-match presentation, Dhoni explained his decision. 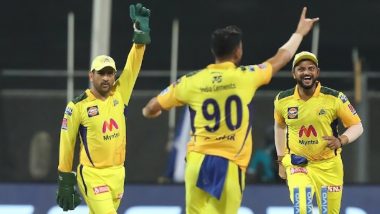 Chennai Super Kings (CSK) registered their first victory of VIVO Indian Premier League (IPL) 2021, thanks to a spectacular show from Deepak Chahar. The right-arm pacer was at his absolute best against Punjab Kings (PBKS) as he dismantled their batting order with a sensational opening spell. He, in total, took four wickets as PBKS were restricted to 106/8 while batting and CSK went on to register a comfortable six-wicket triumph. Notably, there was an interesting moment in the game when Chahar seemed to have dismissed Shahrukh Khan via LBW. After not getting the favourable decision from the umpire, a confident Chahar went straight to MS Dhoni and asked to review, but the CSK skipper turned down his plea. PBKS vs CSK IPL 2021 Stat Highlights: Milestone Nights For MS Dhoni, Deepak Chahar As Chennai Super Kings Cruise To Easy Win.

The episode occurred during the fifth over of PBKS’ innings. The penultimate delivery of the over was an in-swinger, and it smashed Khan’s pads. Chahar went up in a confident appeal, but the umpire wasn’t impressed. However, the 28-year-old pacer was keen to challenge the decision as he went straight to his skipper. The veteran wicket-keeper batsman, however, denied his request, indicating that the ball would have gone over the stumps. The replay confirmed that Dhoni was spot-on. After the game, the 39-year-old explained why he denied the referral. IPL 2021 Points Table Updated.

"I thought the LBW shout (against SRK) was high. So told him no we are not reviewing. I have always felt DRS is there to take the howlers away and not just to take a chance. You only take a chance if it's the last over of the game or it's someone very important," Dhoni said at the post-match presentation.

Dhoni also went on to praise Chahar and his growth over the years. "Overall the years, he has matured into a death bowler too but he's somebody who gets more purchase than other bowlers. If you're looking to attack, why not finish his first four overs. Bravo can bowl at the death. It's not a secret," he added.

Notably, this was Dhoni’s 200th game for CSK, and he wouldn’t have hoped for a better result. However, the Yellow Army still needs to deliver consistently to bury down the ghosts of the last season. The three-time champions will next meet Sanju Samson’s Rajasthan Royals at the Wankhede Stadium in Mumbai on Monday (April 19).

(The above story first appeared on LatestLY on Apr 17, 2021 08:48 AM IST. For more news and updates on politics, world, sports, entertainment and lifestyle, log on to our website latestly.com).