The first match was washed out due to rain and with qualification to the 2023 World Cup at stake, both teams would be raring to go and get a win. 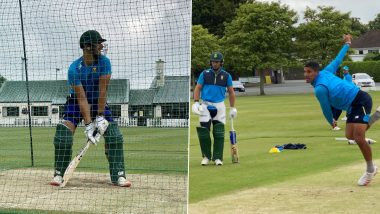 South Africa would aim at a victory which would boost their 2023 World Cup participation chances when they take on Ireland in the second of the three-match ODI series, on Tuesday. The match would be played at the Village, also known as the Malahide Cricket Club in Dublin and is scheduled to start from 03:15 pm IST (Indian Standard Time). The first match between these two sides, which was played on Sunday, June 11 was washed out due to rain. South Africa won the toss and chose to bowl first. Ireland got off to a good start with William Porterfield and Paul Stirling sharing an unbeaten 41-run opening stand. SA vs IRE: Neil Rock, Ireland Batsman, Tests Positive For COVID-19, Stephen Doheny Called Up as Replacement

But rain had other plans as the match, which had several interruptions due to the poor weather, was eventually washed out with Ireland having scored 195/4 in 40.2 overs. This match is all the more crucial because qualification to the 2023 World Cup is at stake and both teams have been awarded five points each in the Super League. A win would do a world of good for any of these sides.

The 2nd ODI of the three-match series between Ireland and South Africa will be played at the Malahide Cricket Club in Dublin on July 13, 2021 (Tuesday). The match has a scheduled start time of 03:15 pm IST (Indian Standard Time).

Where To Watch for Ireland vs South Africa, 2nd ODI 2021 Match on TV

Unfortunately, Ireland vs South Africa, 2nd ODI match won’t be available on TV as there are no official broadcasters of the series in India. So, fans won’t be able to watch the live telecast.

However, fans can follow Ireland vs South Africa, 2nd ODI 2021 live action on online platform. FanCode will provide the live streaming the IRE vs SA ODI match online but fans need to pay a nominal fee.

(The above story first appeared on LatestLY on Jul 13, 2021 02:23 PM IST. For more news and updates on politics, world, sports, entertainment and lifestyle, log on to our website latestly.com).