The third Test between India and England at the Narendra Modi Cricket Stadium in Ahmedabad saw Ishant Sharma become the second Indian pacer after Kapil Dev to play 100 Tests. The tall and lanky pacer has been an unsung hero of the Indian Test team ever since making his debut way back in 2007. 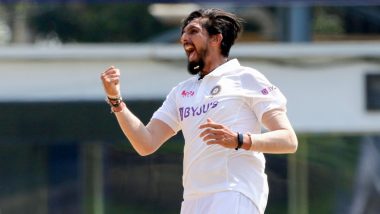 The third Test between India and England at the Narendra Modi Cricket Stadium in Ahmedabad saw Ishant Sharma become the second Indian pacer after Kapil Dev to play 100 Tests. The tall and lanky pacer has been an unsung hero of the Indian Test team ever since making his debut way back in 2007. Although his records might not be staggering, his contribution to the bowling attack is beyond numbers. Hailed as the workhorse of the side, the right-arm fast bowler bowled relentlessly on the spin-friendly tracks to keep the spinners fresh. On the other hand, he led the bowling attack in overseas Test matches. As Ishant completed 100 Test matches, Sachin Tendulkar, Suresh Raina and other members of cricket fraternity lauded the pacer. Ishant Sharma Felicitated by Amit Shah & President Ramnath Kovind, Team India Gives Him Guard of Honour.

Ishant burst onto the scenes as a tearaway fast bowler in 2007. He created a buzz with his ability to set the speed gun on fire and extract bounce off the surface. In fact, he tormented Australian legend Ricky Ponting in his maiden tour to Australia. While fans and experts touted him to rewrite the record books, several injuries and lack of form restricted him. His place in the team was also questioned on several occasions. However, he emerged as a genuine wicket-taker in the past few years and is expected to serve the game in many more years to come. Meanwhile, let’s look at how the cricket fraternity reacted to Ishant’s achievements. India vs England 3rd Test 2021 Live Score Updates Day 1.

Playing 100 Tests is a great landmark for any cricketer, especially a fast bowler. Have seen you play from your U-19 days & played alongside you in your 1st Test. Proud of you & your service to #TeamIndia.

A well deserved milestone @ImIshant. Congratulations & best wishes for your 100th test match brother. This will surely be a momentous #PinkBallTest at #GCA stadium. #INDvsENG pic.twitter.com/7pqsyudT04

What a journey it has been for #IshantSharma . That he is only the 4th Indian bowler ever and only the second Indian fast-bowler to play 100 Test's speaks a lot about his hardwork and toil. Well done lambu ! pic.twitter.com/WsPIgYLFQK

Coming to the Pink-Ball Test, stakes are incredibly high in this contest as the winner would take an unassailable 2-1 lead. Moreover, the loser will be out of the ICC World Test Championship final race. Hence, both sides must leave no stones unturned to get the favourable result. Although the pink ball is known to favour the fast bowlers, the dry surface of Ahmedabad is expected to assist the spinners.

(The above story first appeared on LatestLY on Feb 24, 2021 03:31 PM IST. For more news and updates on politics, world, sports, entertainment and lifestyle, log on to our website latestly.com).