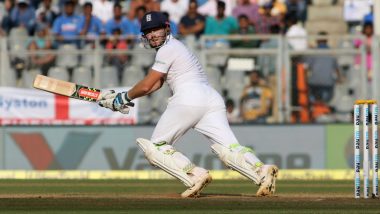 London, July 5: Jonny Bairstow still has a future in Test cricket, said England national selector Ed Smith after the wicketkeeper-batsman was left out of the squad for the first #raisethebat Test against West Indies. "No one doubts he (Bairstow) is a very good cricketer across all formats and no doors are closed for him. We are fully aware of what he can do in Test cricket," Smith was quoted as saying by Sky Sports.

"But it is also the case that we are where we were before coronavirus caused a suspension - Jos Buttler is the man in possession and Ben Foakes was the deputy on that tour to Sri Lanka. "I wouldn't make any presumptions in terms of anything being blocked for Jonny. There is a wide understanding of how good he is at his best. "He is a very talented player and has played some very fine innings for England across the formats. That is not going to be forgotten. Jonny Bairstow Becomes First England Batsman to Slam Two Consecutive World Cup Centuries, Achieves Feat During ENG vs NZ CWC 2019 Match.

"Jonny has had an exceptional spell of form in white-ball cricket and there is cricket to be played there, so it seemed the best arrangement for Jonny to move across to the white-ball bubble. "With Moeen and Jonny, part of the calculation is that they have been very good performers in white-ball cricket."

All-rounder Ben Stokes will become England's 81st Test captain in the match, which will also see the resumption of international cricket which has been on a halt since March due to the Covid-19 pandemic. Earlier this week, it was confirmed that Stokes will replace regular skipper Joe Root, who has returned to Sheffield for the birth of his second child, as captain.

(The above story first appeared on LatestLY on Jul 05, 2020 06:16 PM IST. For more news and updates on politics, world, sports, entertainment and lifestyle, log on to our website latestly.com).