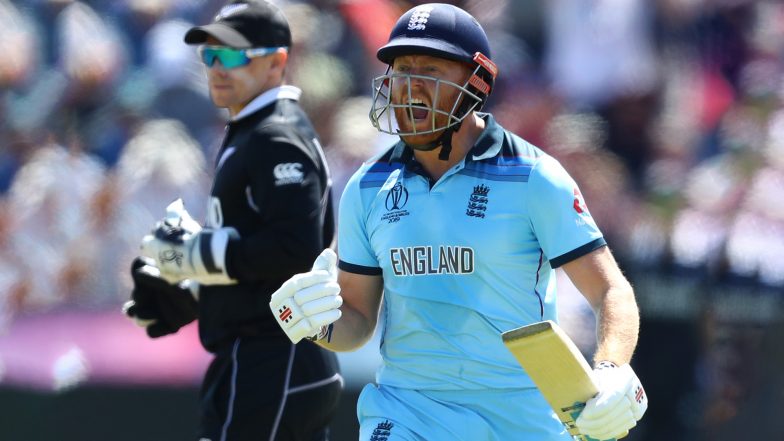 Bairstow joined Shakib Al-Hasan, Kane Williamson and Rohit Sharma as the four players to have scored two-successive hundred in CWC 2019. The 29-year-old had smashed his first and maiden World Cup century in the 31-run victory over India. His second against New Zealand came from 95 deliveries. He reached the milestone in style after hitting Tim Southee – who is playing his first CWC 2019 game – for a four through the square-leg. Bairstow also took eight runs in the 30th over bowled by Southee. This was also Bairstow’s third successive century against New Zealand.

He is also the fastest Englishman and fourth fastest in Cricket’s history to record nine ODI centuries. Bairstow reached the landmark in 66 innings, six more than Shikhar Dhawan at fifth. Hashim Amla leads the record having reached the milestone in 52 innings, while fellow South African opening batsman Quinton de Kock is second in the list after reaching the figures in an innings more. Babar Azam (61 innings) completes the top three.

Earlier, Bairstow and his opening partner Jason Roy (60) registered their second consecutive century-run partnership following the 160 runs stand against India. The duo engaged in a 123-run stand to give England a fiery start after skipper Eoin Morgan had won the toss and opted to bat first. England are in a do-or-die situation and must beat New Zealand in their final league game to qualify for the semi-finals.