KXIP vs RR IPL 2020 Dream11 Team: Chris Gayle, Jofra Archer and Other Key Players You Must Pick in Your Fantasy Playing XI

Rahul Tewatia produced a remarkable turnaround in fortune when he smashed 53 off 31 deliveries, after struggling on 14 from 21 balls at one stage, to lead Steve Smith’s side to a magnificent win when the Royals last played Kings XI Punjab. Since then, however, Punjab have overturned their form and are among the favourites to reach the playoffs. 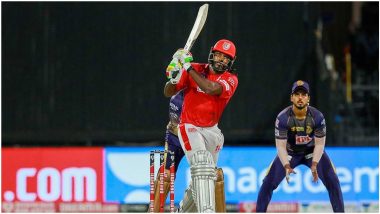 Kings XI Punjab (KXIP) will eye a sixth successive win when they play Rajasthan Royals (RR) in match 50 of Indian Premier League (IPL) season 13. KXIP, placed at the bottom of the IPL 2020 points table after seven games, have jumped to fourth with five consecutive victories which include wins over Mumbai Indians, Royal Challengers Bangalore and Delhi Capitals. Rajasthan Royals are yet to win back-to-back games since victories in their first two matches. Meanwhile, Dream11 fantasy players can find here all the must-pick key players for the Kings XI Punjab vs Rajasthan Royals match. KXIP vs RR Preview: 7 Things You Need to Know About Dream11 IPL 2020 Match 50.

Rahul Tewatia produced a remarkable turnaround in fortune when he smashed 53 off 31 deliveries, after struggling on 14 from 21 balls at one stage, to lead Steve Smith’s side to a magnificent win when the Royals last played Kings XI Punjab. Since then, however, Punjab have overturned their form and are among the favourites to reach the playoffs. Fantasy games have gained enormous popularity among the fans in recent times as it gives many an opportunity to earn some money by picking the right team. KXIP vs RR Dream11 Team Prediction IPL 2020: Tips to Pick Best Fantasy Playing XI for Kings XI Punjab vs Rajasthan Royals Indian Premier League Season 13 Match 50.

The Punjab captain is the highest run-scorer this season in IPL 2020 and has scored 595 runs in 12 matches, which also includes a century and five fifties. When Rajasthan last played Punjab, Rahul scored 69 from 54 balls and was involved in a 183-run opening stand with Mayank Agarwal. In his last match at Abu Dhabi, Rahul almost single-headedly led KXIP to a win before the two-run loss to KKR.

Samson has been in great touch throughout the season but lacked consistency. In the last game against Mumbai Indians though, he scored an unbeaten 54 off 31 balls and showed he was back to his best. Samson has scored 326 runs so far in IPL 2020 but has smashed the most number of sixes with 23 hits already to his name. He will also remember Royals’ last clash against Punjab where he smashed 85 off 42 balls.

Archer has been one of the best pacers in IPL 2020 and has already picked 17 wickets. He is sixth in the list of the highest wicket-taker this season. Archer’s opening spell has been the most destructive in the IPL and he has almost every match picked up a wicket in his opening two overs. Archer will be key for the Royals as they fight to themselves alive in the IPL playoffs race.

He has started late but Punjab haven’t lost after Gayle was included in the playing XI. Gayle guided Punjab to an eight-wicket win over Royal Challengers Bangalore (RCB) and since then they have won five on the trot in most of which Gayle played a defining knock. He has scored 177 runs in the five matches he has played, which also includes two match-winning half-centuries.

Rajasthan Royals lead the head-to-head records with 11 wins in 20 meetings between these teams while Punjab have won 9 matches. But KXIP have won three of the last five matches in these clashes. They are also on a five-match winning streak and will be confident of a good result.

(The above story first appeared on LatestLY on Oct 29, 2020 10:27 PM IST. For more news and updates on politics, world, sports, entertainment and lifestyle, log on to our website latestly.com).