When Kolkata Knight Riders skipper Shreyas Iyer said at the toss that five changes were made to the playing eleven, it seemed like that the two-time champions were getting back to the playing eleven which served them evenly on the basis of skills and abilities in the start of IPL 2022. 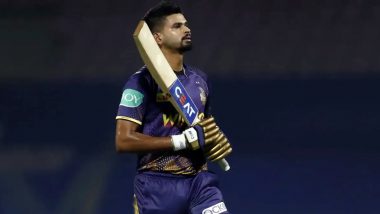 New Delhi, May 10: When Kolkata Knight Riders skipper Shreyas Iyer said at the toss that five changes were made to the playing eleven, it seemed like that the two-time champions were getting back to the playing eleven which served them evenly on the basis of skills and abilities in the start of IPL 2022. The yo-yoing of Venkatesh Iyer's batting position before he was dropped for a few games ended with him slotting back to being the opener which Kolkata needed: Someone who could get them the quick runs in powerplay and make the most out of two men standing outside the 30-yard circle. MI vs KKR, IPL 2022: Jasprit Bumrah Was Special but Disappointed With Batting, Says Rohit Sharma.

Back as an opener, a role which got him into limelight and white-ball debuts for India in 2021/22, Venkatesh helped Kolkata get a fast start after being pushed into batting first. He had begun the innings by dispatching Murugan Ashwin over deep backward square leg for six, followed by drilling a drive on googly through cover. Venkatesh made good use of his feet and crease in the fifth over while facing the pace of Riley Meredith, coming down the pitch and slicing over point. It was followed by him shuffling across and scooping a six over fine leg.

He then brought up Kolkata's fifty by getting an outer edge running through third man off Kumar Kartikeya Singh and then brought out slow-sweep to hit a clean six over deep mid-wicket. Though Kartikeya had the last laugh as a top-edge on slog went to cover-point, Venkatesh had done his job of getting a fast start in powerplay, which yielded 64 runs, making it the best powerplay score of Kolkata and the first time their opening stand went beyond fifty runs, with Ajinkya Rahane getting just nine runs in the first six overs. MI vs KKR Stat Highlights, IPL 2022: Clinical Knights Keep Slender Playoff Hopes Alive With Thumping Win Over Mumbai Indians.

"I think it's my job to go out there and give the team a good start. I'm happy I did that. My intent is always positive and aggressive. Sometimes it comes off, sometimes it doesn't. But T20 cricket, you always have to maximize those first six overs. With the middle order we have, it's very important for us to get a good start so they can contribute," were Venkatesh's words after being one of the main factors for Kolkata's 52-run win.

Kolkata were also well served by the fact that the batters coming after Venkatesh and eventually Rahane's fall didn't let go of the attacking mantle. Nitish Rana hit back-to-back sixes down the ground off Kartikeya to bring up Kolkata's hundred in 11 overs. He took a liking to Pollard's medium-pace, welcoming him with an inside-out loft over extra cover for six. The left-hander took a four and another six, through extra cover and over deep mid-wicket respectively to take 17 runs off the over.

Though Mumbai pulled back brilliantly, thanks to Jasprit Bumrah's riveting spell of 5/10 and him using short balls to good effect in keeping Kolkata to 165/9, even the most ardent fan of the five-time champions must have felt nervous about their batting in the absence of an injured Suryakumar Yadav.

Taking cues from what Bumrah did to his side's batters, Cummins implemented the same and was rewarded instantly when Ishan Kishan, who had got his fifty in 41 balls, couldn't get on to top of a bouncer, top-edging a pull to deep backward square leg. That started Mumbai's slide as Cummins bounced out Daniel Sams in same fashion, with top-edge safely pouched by keeper and ended the over with Murugan Ashwin ramping straight on his short ball to third man. From there, the result was a foregone conclusion, leaving Bumrah's splendid five-wicket haul on the losing side as Kolkata marked a successful return to their initial combination.

(The above story first appeared on LatestLY on May 10, 2022 11:20 AM IST. For more news and updates on politics, world, sports, entertainment and lifestyle, log on to our website latestly.com).