The Pakistan cricket team will only play a two-match Test series against Sri Lanka during their tour of the island nation as the three-match One-day International series has reportedly been scrapped. 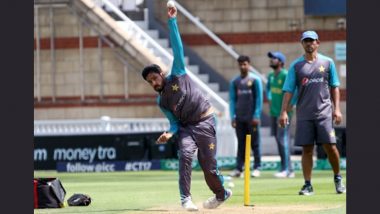 Lahore, May 9: The Pakistan cricket team will only play a two-match Test series against Sri Lanka during their tour of the island nation as the three-match One-day International series has reportedly been scrapped. The Pakistan cricket team is scheduled to tour Sri Lanka in July-August this year, with the series being a part of the 2021/2023 ICC World Test Championship. The final dates of the tour are yet to be finalised. MI vs KKR IPL 2022 Dream11 Team: Tim David, Andre Russell and Other Key Players You Must Pick in Your Fantasy Playing XI.

The three-match ODI series was not a part of the ICC World Cup Super League. A report in Cricket Pakistan said that Sri Lanka Cricket (SLC) had requested the Pakistan Cricket Board (PCB) to remove ODIs as they were planning to stage the Lanka Premier League (LPL) "one week before the scheduled time". The report quoting PCB director, media, Sami-ul-Hasan Burney, said that, "Sri Lankan board wants to start their league a week ago to reduce the financial deficit, so they asked us to remove the ODI series, which was accepted. Since the ODIs were not part of the World Cup Super League, we did not object. The final schedule of the series is still being discussed and will be released soon." MI vs KKR, IPL 2022 Live Cricket Streaming: Watch Free Telecast of Mumbai Indians vs Kolkata Knight Riders on Star Sports and Disney+ Hotstar Online.

The report added that the month-long Australian tour of Sri Lanka in June-July could well decide the future of international cricket in the island nation. Australia are scheduled to begin the tour with the first of the three T20I in Colombo on June 7, which will be followed by a five-match ODI series and finally the two Tests in Galle. It said that if Cricket Australia (CA) say 'no' to the series, given the economic and political turmoil in the island country, the hosting of the Asia Cup in August/September in Sri Lanka will also be in 'jeopardy'. The report said that only 12 hours of electricity was being provided to households in the country, adding that due to the power cuts, hosting day-night matches could become a problem as Sri Lanka Cricket (SLC) could face a fuel shortage to run the stadium generators.

(The above story first appeared on LatestLY on May 09, 2022 03:25 PM IST. For more news and updates on politics, world, sports, entertainment and lifestyle, log on to our website latestly.com).