MI vs KKR IPL 2022 Dream11 Team: Tim David, Andre Russell and Other Key Players You Must Pick in Your Fantasy Playing XI

Dream11 is one of the popular fantasy games and has become quite popular among its users as it allows them to earn real cash, and a great way to do that is by picking the right fantasy playing XI. So here are some players you must-have in your MI vs KKR IPL 2022 Dream11 Team. 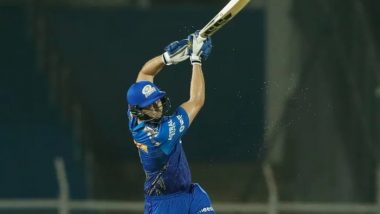 Mumbai Indians (MI) will take on Kolkata Knight Riders (KKR) second time in the tournament on Monday. The match will be inconsequential in terms of the impact of its outcome on the play-off contest due to the fact that MI is already knocked out of play-offs and KKR is virtually out of the competition. Mumbai Indians will only play for pride and look forward to clinch their third consecutive win and Kolkata Knight Riders will make sure to not lose this match in order to get officially eliminated from the play-offs race. Dream11 is one of the popular fantasy games and has become quite popular among its users as it allows them to earn real cash, and a great way to do that is by picking the right fantasy playing XI. So here are some players you must-have in your MI vs KKR IPL 2022 Dream11 Team. MI vs KKR, IPL 2022 Live Cricket Streaming: Watch Free Telecast of Mumbai Indians vs Kolkata Knight Riders on Star Sports and Disney+ Hotstar Online.

The Mumbai Indian (MI) opener gave a solid start to his team to put up a defendable total against the potent Gujarat Titans (GT) on Friday. Ishan Kishan scored 45 in 29 balls to aid MI score 177 runs. He will be crucial for MI in their upcoming match versus Kolkata Knight Riders (KKR) to be played on Monday.

The Mumbai Indians (MI) skipper Rohit Sharma alongwith Ishan Kishan built up a strong opening partnership of 74 runs against Gujarat Titans in their previous match. Rohit Sharma contributed 43 runs from 28 balls to help his side reach a decent total. The MI captain has been taking the charge from the front in previous few games to save the team from further disappointments. Rohit Sharma remains the key to MI in every aspect as they take on Kolkata Knight Riders (KKR) on Monday. IPL 2022 Points Table Updated With NRR.

Apart from Ishan Kishan and skipper Rohit Sharma, Tim David also did an impactful batting against Gujarat Titans on Friday to give the finishing touch to innings. Tim David smashed four sixes and two fours in his 44 off 21 balls to take Mumbai Indians (MI) to a decent total of 177 runs. He will be among the key players to watch out for as Mumbai Indians take on Kolkata Knight Riders (KKR) in match 56 of IPL 2022.

After the top-order of Kolkata Knight Riders (KKR) collapsed against Lucknow Super Giants (LSG) in their previous match, Andre Russell revived the hopes of KKR fans by thrashing the LSG bowlers for five sixes and three four, and scored 45 off just 19 balls, though after his departure KKR's chances of winning further diminished. Earlier in the game, he also bowled out two top order batters of LSG. Andre Russell looks fine with form and key for KKR as they take on Mumbai Indians on Monday.

He also contributed both with ball and bat against Lucknow Super Giants in their last match. Sunil Narine took an important wicket of Quinton de Kock and also scored 22 off 12 balls to try his hand in recollecting the lost hopes of KKR but it all went in vain. He is our another player from KKR who can make the difference as they face Mumbai Indians on May 9.

(The above story first appeared on LatestLY on May 09, 2022 02:57 PM IST. For more news and updates on politics, world, sports, entertainment and lifestyle, log on to our website latestly.com).