RCB vs MI Stat Highlights IPL 2020: Second Super Over of the Season and Other Stats from Royal Challengers Bangalore vs Mumbai Indians 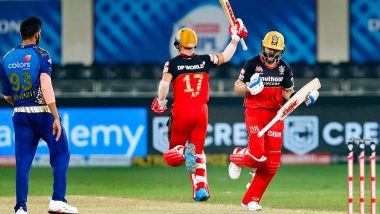 Indian Premier League 2020 (IPL 2020) witnessed its second Super Over. Royal Challengers Bangalore (RCB) and Mumbai Indians (MI) match ended in a tie but it was RCB who won the Super Over and walked away with two valuable points. Despite Ishan Kishan (99) and Kieron Pollard’s fighting knocks, Mumbai Indians failed to cross the line. Pollard, who scored unbeaten 60 off 24 balls, smashed four off last ball to take the match in the Super Over. RCB Funny Memes Surface Again Despite Team’s Super Over Win, Twitterati Also Praise Ishan Kishan, Kieron Pollard for Fighting Knocks During RCB vs MI Dream11 IPL 2020 Match.

Navdeep Saini bowled a superb Super Over and gave away only seven runs. AB de Villiers and captain Virat Kohli then chased down the required eight runs as Jasprit Bumrah failed to defend the total in the Super Over. Meanwhile, check out some of the stat highlights from RCB vs MI IPL 2020 match. Virat Kohli Funny Memes Go Viral After RCB Captain’s Yet Another Poor Outing, Scores 3 off 11 Balls in RCB vs MI Dream11 IPL 2020.

# This was the first Super Over between RCB and MI.

# This was RCB’s third Super Over, two wins and one defeat.

# 201 is now the highest total scored by each team in a tied match in IPL.

(The above story first appeared on LatestLY on Sep 29, 2020 12:32 AM IST. For more news and updates on politics, world, sports, entertainment and lifestyle, log on to our website latestly.com).