India vice-captain for the rescheduled fifth Test against England Rishabh Pant has given the credit for the massive 222-run stand between him and Ravindra Jadeja to "setting small goals" and excellent communication between the two on Day One of the match. 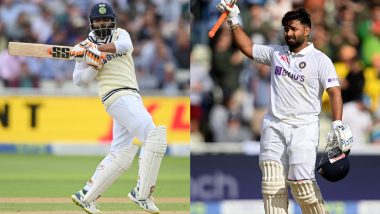 Edgbaston, July 4 : India vice-captain for the rescheduled fifth Test against England Rishabh Pant has given the credit for the massive 222-run stand between him and Ravindra Jadeja to "setting small goals" and excellent communication between the two on Day One of the match. India were in dire straits at 98/5 when Pant and Jadeja came together to turn the game on its head and give the tourists advantage on the opening day. Pant ended up scoring a 111-ball 146 on Day 1 and by the time Jadeja was dismissed on Day 2, he too had scored a century in India's 416-run total. IND vs ENG 5th Test Day 3 Stat Highlights: Jonny Bairstow Shines but India on Top.

"The communication was excellent between the two of us. We decided we will do small-small partnerships... 20 runs, 50 runs. When we started at 98/5, we spoke when we touched 150, then we spoke when we reached 175. That communication was the best part of our innings," revealed Pant in a video shared by BCCI. Jadeja added that it's natural for a batter in the middle to get confident after scoring a few boundaries, which results in him committing mistakes and throwing away his wicket. But the communication between him and Pant gave them the roadmap to go about their task in a cool and calculated manner. IND vs ENG 5th Test Day 2 Stat Highlights: Jasprit Bumrah’s All-Round Effort Keeps India Ahead.

"It happens during a Test match that after you hit 2-3 boundaries, you become so confident that your shot-selection suffers. That increases the risk of getting out. So, our discussion to prolong the partnership for as long as we could really helped. That partnership changed the game... from 98/5 we reached 416," said Jadeja. "Having said that, it was a huge team effort, everyone contributed to the score... even those who came later in the order; Bumrah, Shami they also tried to build partnerships." Jadeja also spoke about how Pant stuck to the plan the two discussed in the middle, adding that confidence was the hallmark of the wicketkeeper-batter's historic innings. "Whatever he told me, he played exactly the same way. I could see he was very confident about his shots, very calm against every bowler," added Jadeja.

(The above story first appeared on LatestLY on Jul 04, 2022 01:18 PM IST. For more news and updates on politics, world, sports, entertainment and lifestyle, log on to our website latestly.com).