Rishabh Pant's side bounced back from a heavy defeat at the hands of Chennai Super Kings a few days ago with this emphatic win. Rajasthan Royals on the other hand, will once again look to get back to the drawing board and start winning games. 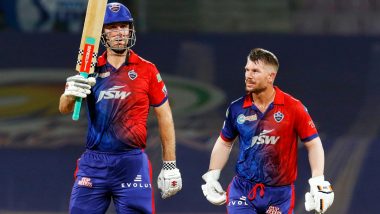 Mitchell Marsh and David Warner showed exactly why they were so instrumental in Australia's T20 World Cup win last year as they helped Delhi Capitals pull off a clinical run chase to beat Rajasthan Royals in IPL 2022 on Wednesday. Chasing 161 to win, the duo stitched a 144-run partnership that almost sealed the outcome in their favour before Rishabh Pant came out and whacked two sixes to seal the chase within 18.1 overs. This victory does keep Delhi Capitals alive in contention for a playoff berth. But it also does increase pressure on Rajasthan Royals, who find themselves third on the points table but will need some work before their next match. IPL 2022 Points Table Updated With NRR

Marsh and Warner, although clinical, were aided by luck as well. While Marsh survived after a yorker by Trent Boult had struck his pad first and then the bat (Rajasthan opting against a review after on-field umpire signalled not out), Warner himself was left surprised when a Yuzvendra Chahal delivery hit his stumps but did not dislodge the bails. The Aussie duo made the most out of the pretty average bowling performance and walked away with two important points.

Earlier, Ravichandran Ashwin had scored his first IPL fifty and Devdutt Padikkal struck 48 runs as Rajasthan Royals posted 160/6. The other batters failed to make any major impact at all as the next best score was 19. Chetan Sakariya, Anrich Nortje and Mitchell Marsh scalped two wickets each.

Delhi Capitals, with a lot of confidence, will now face Punjab Kings on May 16. Rajasthan Royals, on the other hand, would aim to return back to winning ways when they take on Lucknow Super Giants on May 15,

(The above story first appeared on LatestLY on May 11, 2022 11:56 PM IST. For more news and updates on politics, world, sports, entertainment and lifestyle, log on to our website latestly.com).