After this match, only one of these two sides would stay alive in the playoff race while the other would be left waiting for different results to go their way in order to get through to the last four. While Rajasthan would be high on confidence, Mumbai Indians would somehow desperately try and bounce back to winning ways. 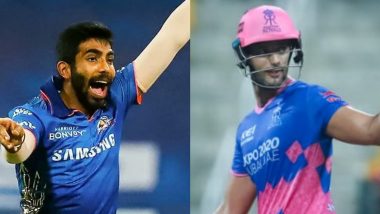 Rajasthan Royals and Mumbai Indians face off in a must-win encounter in match 51 of the Indian Premier League on Tuesday, October 5. The match would be played at the Sharjah Cricket Stadium and has a start time of 7:30 pm IST (Indian Standard Time). Both sides are currently locked on 10 points each and are in contention to make it to the playoffs. But with contrasting results, in their previous matches, things could become interesting when the defending champions play Sanju Samson's young side, which has started to play freely and show why they have a great bunch of future stars. RR vs MI, IPL 2021 Live Cricket Streaming: Watch Free Telecast of Rajasthan Royals vs Mumbai Indians on Star Sports and Disney+Hotstar Online

Mumbai lost to Delhi in a thrilling encounter in the previous match while Rajasthan romped to a dominant win over Chennai Super Kings in their latest fixture. The confidence levels thus in both the camps would be different but Mumbai would know that they can't afford to lose any more matches, and if they do so, their title defense unfortunately would be over. Fans making fantasy teams on Dream11 would be well-acquainted with the fact that a captain fetches double points while the vice-captain multiplies the points x1.5 times. Having said that, let us take a look at the recommended picks for captain and vice-captain for this match.

Despite Mumbai Indians struggling to make a mark in the UAE leg of IPL 2021, Jasprit Bumrah has undoubtedly been one of their most solid performers. The right-arm pacer came to the UAE on the back of a fantastic Test series against England and has somewhat replicated that form, picking up 11 wickets in the last five matches he has played for the defending champions. He would once again be a key player for Mumbai Indians as they attempt to stay alive for a playoff berth. RR vs MI Preview: Likely Playing XIs, Key Battles, Head to Head and Other Things You Need To Know About VIVO IPL 2021 Match 51

Young Shivam Dube showed glimpses of why he was rated as a being devastating with the bat in hand. The left-hander smashed his way to 64 runs off just 42 balls and along with fellow southpaw Yashasvi Jaiswal, he helped his side beat Chennai Super Kings, quite comfortably in the end. He would be expected to shine for his side once again and the Mumbai all-rounder is the recommendation for the vice-captain's slot in your fantasy team for this match.

(The above story first appeared on LatestLY on Oct 05, 2021 02:20 PM IST. For more news and updates on politics, world, sports, entertainment and lifestyle, log on to our website latestly.com).