The left-hander missed the New Zealand Test series due to personal reasons while returning from South Africa after playing the ODIs due to a family emergency. 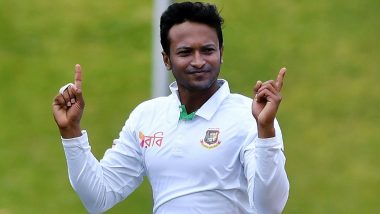 Dhaka, May 10: Bangladesh all-rounder Shakib Al Hasan was on Tuesday ruled out from the opener of the two-match Test series against Sri Lanka after he tested positive for Covid-19. The 35-year old Shakib returned from the USA on Monday and was expected to join the Bangladesh squad in Chattogram on Tuesday. However, after testing positive twice, the all-rounder was sent home and into isolation. Henry Nicholls, New Zealand Batter Faces Injury Scare Ahead of England Tour.

As per the Covid-19 protocol, he will have to stay in isolation for the next five days. "Shakib tested Covid positive and will not be available for the opening Test against Sri Lanka," Jalal Yunus, BCB's cricket operation chairman told Cricbuzz.

Shakib last played a Test when Bangladesh took on Pakistan in Mirpur in December 2021. He was expected to make a return to longer format in the upcoming home series against Sri Lanka. The left-hander missed the New Zealand Test series due to personal reasons while returning from South Africa after playing the ODIs due to a family emergency.

(The above story first appeared on LatestLY on May 10, 2022 09:10 PM IST. For more news and updates on politics, world, sports, entertainment and lifestyle, log on to our website latestly.com).