Virat Kohli ended his RCB captaincy career with 66 wins, 70 defeats and four no-results in a total of 140 matches and now he is set to focus completely on his batting for the franchise. But what is important is his choice to not part ways with a franchise in failure--especially where he grew into a modern-day great as we know him today. 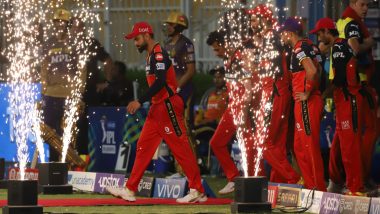 "Loyalty matters more to me than other things which from the worldly point of view seem more important." A teary-eyed Virat Kohli said this, still letting a wry smile pass through, giving the impression that everything was alright. But in reality, it wasn't, for him and his franchise, Royal Challengers Bangalore (RCB). They had just lost out a do-or-die game in the IPL this year where they have performed so well and well, the 32-year old, needless to say, did not have a pleasant ending to his RCB captaincy. But what is important is the fact that despite quitting captaincy of the only franchise he is known to wear the colours of, in the IPL, he chose to remain loyal to it, albeit as a batsman, from next year on. And that is why he would always an integral part of the franchise and also the IPL at large. ‘Thank You Virat Kohli’ Messages Flood Twitter After 32-Year Old Ends Tenure As RCB Captain With Defeat to KKR in IPL 2021 Eliminator (Check Posts)

To start off, this is not a Virat Kohli eulogy. He has legions of fans for him to do that. What is highlighted here is the fact that he has decided to stick to the franchise even when they have always been perennial underperformers in the IPL. Yes, he was captain all this long but now, he has freed himself from that role, which automatically, perhaps for any other player, would have made it easy to change jerseys and franchise allegiances in the tournament. A new team, fresh environment, different teammates and a novel challenge--well, these would have been sought by any other player who had given up the leadership role of a franchise, one which has failed to win a single title in 14 years of the competition. Virat Kohli's Last Tweet As RCB Captain: Star Cricketer Thanks Management and Fans for 'Constant Support'

But for Kohli, RCB's failures doesn't determine his love-affair with this outfit. In his words, "It is very difficult to keep the right perspective, especially from the worldly point of view when you are not getting the results that you want and still have faith in the direction we are operating. Yes, it might not have accumulated in the things we wanted but it is the trust, faith and belief that matters in the end." In an emotional and reflective video, he recalled his journey as RCB captain from 2011-2021 and it was shared by the franchise on Instagram.

This sends out a very important message, one that can turn out to an example for every young sportsperson to follow. It is not wrong to switch sides and opt for fresh challenges--Cristiano Ronaldo has been doing that and has grown into one of the world's very best in football. But for Kohli, it is different. RCB was the space where he grew in cricket, Having joined as a youngster fresh from winning the U19 World Cup in 2008, he rubbed shoulders with the greats of the game like Rahul Dravid, Jacques Kallis, Dale Steyn and Daniel Vettori. And he grew into a man from a boy and then to the cricketing titan that the world knows him today as. He thereby chooses to be with this team till his day in the IPL and still not end up winning a title. But that would not take away anything from his belief in loyalty. Perhaps not all but he would probably owe a part of his personal success as a cricketer, to RCB and that would be in his retirement video (which for legions of cricket fans, is very very far away!)

Staying loyal and associated with an outfit that is trolled every year for choking in important junctures of the IPL is a gutsy, classy act. He has seen it all but an IPL title at RCB--from the highs of scoring those 973 runs in a season to the lows of getting dismantled for just 49 in a match. And yet, he chose to remain loyal to the franchise. He has set examples with the bat many times and now, he has set one outside the field. Class act!

Next year, Kohli would not be at the toss before every RCB match and instead, would be seen sharpening his skills with the blade. Freed off all difficult captaincy decisions, he would able to focus on his own game and potentially take it to a higher level. Buckle up cricket fans--Virat the batsman is coming next year and IPL better be prepared.

(The above story first appeared on LatestLY on Oct 15, 2021 08:17 PM IST. For more news and updates on politics, world, sports, entertainment and lifestyle, log on to our website latestly.com).