Joao Felix and Luis Suarez will likely start in a two-man forward line for the visitors. Koke, Rodrigo de Paul and Marcos Llorente are technically gifted footballers and they could pose problems for AC Milan. The Italian giants would be eager to mark their return to the Champions League with a home win. 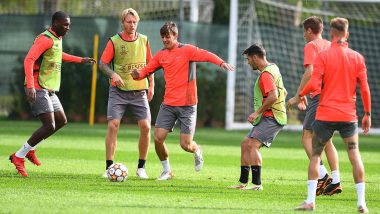 Champions League nights return to San Siro after several years as Italian giants AC Milan take on Atletico Madrid. The Rossoneri lost their opening game against Liverpool and this puts pressure on them heading into this game. They are flying high in Serie A though with five wins out of their first six games. Stefano Pioli will be encouraged by the way his team controlled large parts of the game at Anfield and it was probably lack of composure in defence that led to the loss. Opponents Atletico Madrid could not find a way past FC Porto in their opener but would not be too disappointed with the point they earn. AC Milan versus Atletico Madrid will be telecasted on the Sony Ten Network and streamed on Sony Liv app from 12:30 AM IST. Juventus 3-2 Spezia, Serie A 2021-22: Moise Kean, Federico Chiesa and Matthijs de Ligt Help Bianconeri Seal Their First Win This Season

Zlatan Ibrahimovic is still out with an injury for AC Milan and Olivier Giroud is likely to lead the line for the Italian outfit. Franck Kessie is the key man in midfield for the hosts as he is the one that controls the tempo of their play. Brahim Diaz will act as the link between the midfield and attack and needs to utilise the width well where the likes of Rafael Leo and Alexis Saelemakers will be looking to make amends.

Atletico Madrid lost out to Deportivo Alaves in their previous match which is not ideal preparation for such a heavyweight European battle. Thomas Lemar remains unavailable for the host as recovers from a muscle problem. Joao Felix and Luis Suarez will likely start in a two-man forward line for the visitors. Koke, Rodrigo de Paul and Marcos Llorente are technically gifted footballers and they could pose problems for AC Milan. AC Milan have not won a game since 2013 in the Champions League but tonight things could change with the Italians clinching a narrow win over the team from Madrid.

AC Milan vs Atletico Madrid clash in UEFA Champions League 2021-22 will be played at San Siro Stadium in Milan on September 29, 2021 (Wednesday). The game has a scheduled time of 12:30 am IST (Indian Standard Time).

Sony Pictures Network are the official broadcasters of UEFA Champions League 2021-22 in India and will telecast the games live on its channels. Fans can tune into Sony Sports HD/SD channels to watch the live telecast of AC Milan vs Atletico Madrid on TV.

Sony Pictures Network’s official OTT platform Sony Liv will be streaming the game live for its fans in India. You can tune into the Sony Liv app or website to watch AC Milan vs Atletico Madrid, UEFA Champions League 2021-22 live streaming online. JioTV would also provide live streaming for this match.

(The above story first appeared on LatestLY on Sep 28, 2021 05:28 PM IST. For more news and updates on politics, world, sports, entertainment and lifestyle, log on to our website latestly.com).