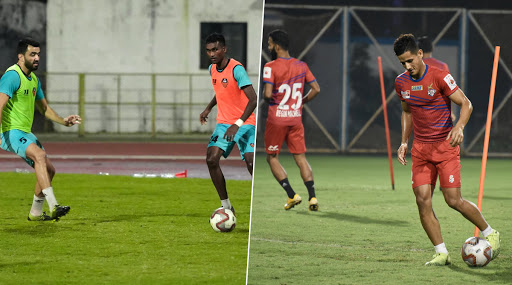 FC Goa (FCG) will host high-flying Atletico de Kolkata (ATK) in match 38 of the Indian Super League (ISL) 2019-20. ATK vs FCG match will be played at the Fatorda Stadium in Goa on December 14, 2019 (Saturday). Both teams are enjoying a terrific campaign and are in the top 4 on the points table. ATK are the current leaders of ISL while the Gaurs occupy the fourth spot and the teams are in a good run of form as they were victorious in their last outing. For fans of Dream11 fantasy game, here are some tips and team suggestions so you can build a strong team for the FC Goa vs ATK clash in ISL 6. ISL 2019–20 KBFC 2–2 JFC Result: Messi Brace Helps Kerala Blasters Mount Fight Back From Two Goals Down Against Jamshedpur FC.

FC Goa defeated Hyderabad 0-1 in their last ISL match courtesy a second-half strike from Manvir Singh. The Gaurs will welcome back Senagalese center-back Mourtada Fall as he missed the previous game but he may not start as youngster Chinglensana Singh deputised very well for him and had a passing accuracy of 94.73 percent. He was also selected as the Hero of the Match. Spaniard Edu Bedia will once again be the key for Goa in unlocking a resolute ATK defence. Indian Super League 2019–20 Points Table Updated.

ATK swept aside NorthEast 3-0 in their previous game and it was again the duo of Roy Krishna and David Williams who scored the goals. Roy Krishna is the outright top goalscorer in ISL 2019-20 and will be eager to add to his tally against the Gaurs. They have conceded the second-lowest goals in the competition so far and will be confident that they can shut out Goa in this match as well.

FC Goa vs ATK, ISL 2019, Dream11 Team Prediction: Defenders – Both teams are expected to play an attacking brand of football so selecting three defenders is a good option. The players in your defence should be Carlos Pena (FCG), Garcia Iniguez (ATK) and Pritam Kotal (ATK).

FC Goa vs ATK, ISL 2019, Dream11 Team Prediction: Midfielders – Brandon Fernandes (FCG) will be the main creative outlet for Goa and can be selected as your vice-captain. The other players in your midfield should be Edu Bedia (FCG), Edu Garcia (ATK) and Carl Mchugh (ATK).

FC Goa vs ATK, ISL 2019, Dream11 Team Prediction: Forwards – Roy Krishna (ATK) is in good goal-scoring form and should be selected as your captain. The other strikers in your team should be Manvir Singh (FCG) and David Williams (ATK).

Both teams are in the top 4 and a win could see either of them lead the points table at the end of the day, so both sides will be going for a victory in this heavyweight clash.