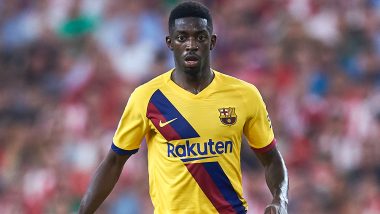 Ousmane Dembele who was recovering from his muscle injury and was close to returning to action has once again injured himself. The Barcelona forward is expected to be out for another five months due to a torn hamstring and this has put the Spanish club in a spot of bother. With their failure to sign a striker in the January transfer window and with Luis Suarez not returning until March, the club has just two fully fit first-team forwards in Lionel Messi and Antoine Griezmann and are now looking at various options. Lionel Messi Hits Out At Barcelona Sporting Director Eric Abidal Over Squad Criticism.

According to a report from Spanish news outlet Sport, Even after the end of the transfer window, Barcelona can still sign a replacement for Ousmane Dembele given the necessary conditions are met. The rules state, Barcelona can sign a replacement if Dembele is out for more than five months but the incoming player must be from Spain and not from any other league. The Spanish club will have 20 days since the conformation of injury to apply for permission to the RFEF for adding a new player. Then the medical committee will look at the petition and if they give the go-ahead, Barcelona will have 15 days to find a new striker. But the rule also states that if Dembele was to recover quicker, he will not be allowed back into the squad until next season. La Liga 2019-20 Match Result: Ansu Fati and Lionel Messi Connection Sees Barcelona Hold on Against Levante.

This is the 10th injury the Frenchman has suffered since his move to Barcelona in 2017. Various reports from Spain suggests that Barcelona are already looking for a replacement. Christian Stuani of Girona and Rodrigo Moreno of Valencia are the two possible players which the Spanish club could sign.

(The above story first appeared on LatestLY on Feb 05, 2020 02:25 PM IST. For more news and updates on politics, world, sports, entertainment and lifestyle, log on to our website latestly.com).