Barcelona next face Dynamo Kyiv in the 2020/21 UEFA Champions League looking to consolidate their position at the top of Group G. The problem for the Catalonians at the moment is lack of confidence in the squad. Ronald Koeman knows these are the warning signs and he must come up with a solution to arrest the slide. 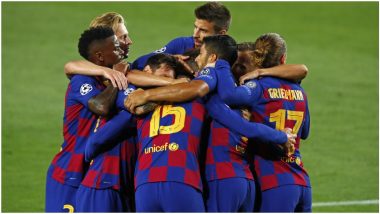 Barcelona vs Dynamo Kyiv, UEFA Champions League 2020-21 Free Live Telecast and Live Streaming Online in IST: Barcelona are in a spot of bother at the moment with their domestic form leaving them 12th in the league. They have done well in Europe so far with wins in their opening two games including a big scalp of Juventus. They next face Dynamo Kyiv in the 2020/21 UEFA Champions League looking to consolidate their position at the top of Group G. The problem for the Catalonians at the moment is lack of confidence in the squad. Ronald Koeman knows these are the warning signs and he must come up with a solution to arrest the slide. Dynamo Kyiv have a point so far and need a win to keep their qualification hopes alive. Barcelona versus Dynamo Kyiv will be telecasted on Sony Ten network and streamed on Sony Liv app from 1:30 am IST.  Meanwhile, fans can scroll down to get the live streaming, telecast and other details of BAR vs DYK match. BAR vs DYK Dream11 Prediction in UEFA Champions League 2020–21.

Marc-Andre ter Stegen has returned to first-team training and is in contention for a start tonight. Ousmane Dembele and Ansu Fati should start on the wings for the hosts with Antoine Griezmann as the lone striker. Pedri in the no 10 role is a floater who will drop deep to receive the ball and spray around the passes. Miralem Pjanic and Frenkie de Jong in midfield give stability to the team with the former making the side tick.

Barcelona vs Dynamo Kyiv match in UEFA Champions League 2020-21 will be played at Camp Nou in Barcelona. The Group G UCL match will take place on November 5 (Wednesday midnight) and it is scheduled to be played at 01:30 am IST (Indian Standard Time).

Fans in India can live telecast the Barcelona vs Dynamo Kyiv match on Sony Sports Channels. Sony is the official broadcaster for UEFA Champions League 2020-21 in India. Fans can catch the live action of JUV vs BAR Group B match live on Sony Ten SD and HD channels.

The Group B clash will also be available live online. SonyLiv will be live streaming the Barcelona vs Dynamo Kyiv UEFA Champions League match online for its fans in India. There will be goals in this game, and at the end of 90 minutes, the two sides might cancel each other out.

Meanwhile, Dynamo Kyiv have a number of players in quarantine after testing positive for the coronavirus and the situation is so bad, they are left with just 13 list A players. Vladyslav Supriaha starts as the lone man upfront with Viktor Tshyankov on the wings. Vitaliy Buyalskyi has managed two goals and five assists this season and remains their only goalscoring threat in the final third.

The game is more like a formality for Barcelona with the opposition barely managing the numbers. For Dynamo Kyiv, the main aim will be to avoid an embarrassment tonight.

(The above story first appeared on LatestLY on Nov 04, 2020 07:05 PM IST. For more news and updates on politics, world, sports, entertainment and lifestyle, log on to our website latestly.com).