The 36-year old has a year left on his contract at Turin and after a disappointing year with Juventus, the forward hasn't committed his future at the club. Ronaldo is also on the verge of breaking many records in Euro 2020. 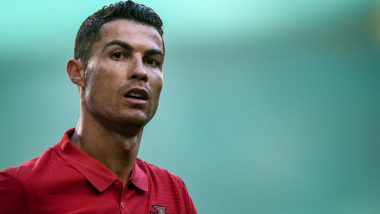 Portugal star Cristiano Ronaldo has once again showed uncertainty over his future at Juventus ahead of his side's opening Euro 2020 clash against Hungary. The 36-year old has a year left on his contract at Turin and after a disappointing year with Juventus, the forward hasn't committed his future at the club. Speaking to the press ahead of his side's Euro 2020 match against Hungary, Ronaldo said, "I've been playing at a high level for 18 years, it doesn't even tickle me. If I were starting now, being 18 or 19 maybe, I wouldn't sleep thinking about my future. Watch: Cristiano Ronaldo Removes Coke Bottles and Shouts ‘Drink Water’ During Press Conference

"But as you can calculate by now, at 36-years-old... whatever comes will be for the good, regardless of whether one stays or leaves, that's not the most important thing now. The focus is on the national team. A competition of this magnitude you don't play every day," he added.

Ronaldo completed a total of three years for Juventus till now and has helped his side win the Coppa Italia last season. Despite him being a top performer for the club, Juventus conceded the Serie A title to Inter and also were knocked out of the Champions League by Porto. He scored 36 goals in 44 matches for Juventus last season.

Ronaldo had inspired Portugal to a title win at the Euros 2016 in France. The star forward would be playing his fifth European championship. This is my fifth European Championship but for me it feels as though it's my first," he said.

"The most important thing for me is to start on the right foot tomorrow, to win and play well. Positive thinking. This is obviously not the same team as in 2016, it is a younger team with enormous potential. Only competition will tell if we are better or worse," he added.

Ronaldo is on the verge of breaking a few records. One of them is that of the leading scorer. If he scores in this tournament, which is highly likely, he would go past French legend Michel Platini's tally of nine goals. He also has made 55 appearances and is likely to surpass Gianluigi Buffon's record of 58 appearances for Italy. Ronaldo is also five goals shy of breaking Iran great Ali Daei's all-time record of 109 international goals.

Talking about these potential records which he could break, Ronaldo said, "The most beautiful record would be to win the Euros twice in a row. The team has been doing well, it's prepared. I hope that tomorrow the team goes on with the right foot, which is very important in this type of competition. We're going to play against a well-prepared team, who will have the support of the public in their stadium. It's important to have the fans."

He also credited his football success to his ability to adapt to the game, which is evolving and changing. "The intelligence of a football player is to adapt to the game. The game itself is different. Players who have longevity in football are those who can adapt. The numbers speak for themselves: I have adapted from 18 to 36. I always work to achieve things on a personal and collective level. I think the times have been very positive. I think I've adapted very well to all the times I've played," he said.

(The above story first appeared on LatestLY on Jun 15, 2021 03:20 PM IST. For more news and updates on politics, world, sports, entertainment and lifestyle, log on to our website latestly.com).