Cristiano Ronaldo Hails Team After Scoring for 19th Season Consecutively, Post up a Post After Juventus vs Sampdoria, Serie A 2020-21 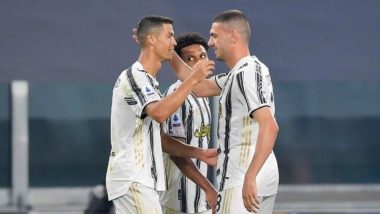 Cristiano Ronaldo has hailed team Juventus for a 3-0 win against Sampdoria last night at the Juventus Training Center. The team took to social media and hailed the team for the stunning win in their first game of Serie A 2020-21. Ronaldo took to social media and posted a series of pictures of himself during the game. The five-time Ballon d’Or winner even scored a goal during the match and this was his straight 19th season goal. Ronaldo has been in the best of form since the start of 2020 and has single-handedly led Juventus to a win. This was the first assignment by Juventus’ new manager Andrea Pirlo. Cristiano Ronaldo Scores Goal For Straight 19th Season During Juventus vs Sampdoria, Serie A 2020-21, Leads Team to 3-0 Win (Watch Goal Highlights).

The first goal of the match was netted by Dejan Kulusevski at the 13th minute of the match. He was assisted by the Portugal star. Until half time Juventus remained 1-0. Leonardo Bonucci came up with the second goal at the 78th minute. Exactly 10 minutes later, Ronaldo came up with a net and led the team to a 3-0 win. Now, let's have a look at the post by CR7.

It's always good to start the season with a win!✌🏼💪🏼 Well done team👏🏼 #finoallafine #forzajuve

Ronaldo has been in red hot form since the start of 2020. This was his 22nd net in 2020 from 27 appearances. Andrea Pirlo also looked quite happy with the performance of the team.

(The above story first appeared on LatestLY on Sep 21, 2020 11:10 AM IST. For more news and updates on politics, world, sports, entertainment and lifestyle, log on to our website latestly.com).