A total of 32 teams would compete for the FIFA World Cup title in Qatar. Many prolific scorers, the likes of which include Lionel Messi, Cristiano Ronaldo, Neymar and Kylian Mbappe among others would be competing for this top prize. 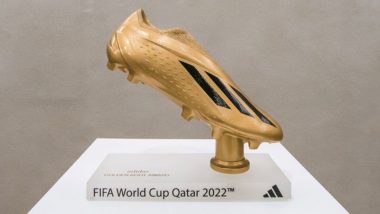 Kylian Mbappe finished as the Golden Boot winner in FIFA World Cup 2022 with a tally of eight goals in the competition. The PSG star was level with Lionel Messi, his club teammate but his hattrick in the final put him ahead of the Argentine forward. Messi finished second with seven goals with a brace in the final. Argentina's young striker Julian Alvarez found himself third on this list with four goals, the same as his French counterpart Olivier Giroud who too had the same number of strikes. Spain's Alvaro Morata finished fifth in the Golden Boot race. FIFA World Cup 2022 Semifinal Schedule in IST: Know Who Play Whom in Last Four of Football WC

The Golden Boot is awarded to the top scorer in a FIFA World Cup edition and this time, there are some serious contenders for the prize. Cristiano Ronaldo and Lionel Messi will always be the mix whenever there arises a question of some prolific scorers and the veteran duo, who are most likely playing their last World Cup, would be joined by other names, the likes of which include Kylian Mbappe, Neymar, Harry Kane, Bukayo Saka, Bernardo Silva, Robert Lewandowski among many other names. FIFA World Cup 2022 Schedule for Free PDF Download Online: Get Football Fixtures, Time Table With Match Timings in IST and Venue Details.

Harry Kane had won the Golden Boot in the last edition of the World Cup in 2018, Russia. The England striker had netted a total of six goals. He was followed by France’s Antoine Griezmann in second place with four goals, the same number of strikes Cristiano Ronaldo had. This time too, the race for the Golden Boot is expected to be a heated one with many other players, mostly young ones, set and make an impact in the grandest global football tournament. Colombia’s James Rodrigues, Germany’s Thomas Muller and Miroslav Klose have been some of the past winners of this prestigious award.

(The above story first appeared on LatestLY on Nov 23, 2022 09:54 AM IST. For more news and updates on politics, world, sports, entertainment and lifestyle, log on to our website latestly.com).