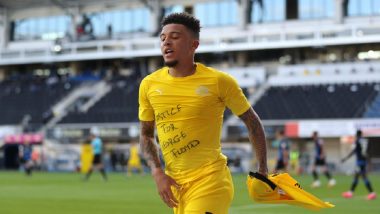 Jadon Sancho has been linked with a move to Manchester United but an agreement is yet to be reached between the two clubs. Both the teams are in constant contact with each other but the Englishman’s transfer fee still remains an issue which needs sorting out as the 20-year-old has already agreed personal terms. Amid all this, the winger has joined Borussia Dortmund for their pre-season training camps. Jadon Sancho Assures Borussia Dortmund of Playing With ‘Same Commitment’ if Deal With Manchester United Fail.

Borussia Dortmund have begun their preparations for the upcoming football campaign as the German side is travelling to Switzerland to take part in training camps ahead of their two scheduled friendly matches. On Monday, the Black and Yellow’s announced the team which will take part in the pre-season arrangements and Jadon Sancho is a part of it. Manchester United Manager Ole Gunnar Solskjaer Drops Big Hint on Borussia Dortmund Star’s Move (Watch Video).

Sancho With the Squad

The Bundesliga side will play two friendlies this month in order to get themselves ready for the next footballing season. New signing Jude Bellingham and Thomas Munier are included in the squad but captain Marco Reus and Marcel Schmelzer will not be travelling with the team as they continue to recover from their respective injuries.

The addition of Jadon Sancho clearly suggests that he is still a Borussia Dortmund player and no agreement has been done between the two sides. According to a recent report, the German side have given Manchester United until August 10, 2020, to pay the winger's transfer fee of $120million or else the deal will be called off.

Jadon Sancho is also eager to play for Manchester United and reportedly has agreed personal terms which will see him sign a contract until 2025. However, the Red Devils are unwilling to pay Dortmund’s asking price in full ahead of the given deadline as they consider it to be ridiculous and artificial.

(The above story first appeared on LatestLY on Aug 10, 2020 04:25 PM IST. For more news and updates on politics, world, sports, entertainment and lifestyle, log on to our website latestly.com).