Juventus' Search For Cristiano Ronaldo’s Successor Set to End With Paulo Dybala, Argentine Likely to be ‘New Face of the Club’!

Cristiano Ronaldo will be 37 when his contract with Juventus expires in 2022 and it seems highly improbable that the Italian club will offer him a new deal beyond that. However, with the Portuguese being in the twilight years of his career, the Bianconeri’s are preparing for life after him and are preparing to offer his successor a new deal. 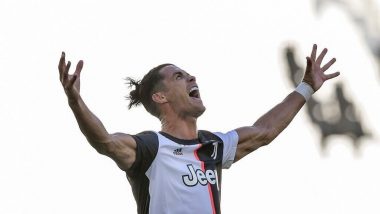 Juventus have some of the best forwards in the world at the moment but among them, it is Cristiano Ronaldo who has been scoring goals aplenty in recent months. The five-time Ballon d’Or winner has netted 28 league goals this season and is among the favourites to win the European Golden Boot Award as well. However, with the Portuguese being in the twilight years of his career, the Bianconeri’s are preparing for life after him. Cristiano Ronaldo Donates Autographed Juventus Shirts to Cuban Medical Staff Ahead of Their Game Against Sassuolo (See Pic).

Cristiano Ronaldo will be 37 when his contract with Juventus expires in 2022 and it seems highly improbable that the Italian club will offer him a new deal beyond that. And as per reports in Italy, the record champions are already planning ahead and are all set to offer his successor Paulo Dybala a deal to keep him at the club and make him the 'new face of the club'. Cristiano Ronaldo Determined to Stay and Win Trophies at Juventus.

According to Tuttosport, Juventus will give Paulo Dybala a new contract which the Argentine will sign in August ahead of their Champions League campaign. The 26-year-old’s current deal expires in 2022 but the new contract will see him stay at the club until 2015 and increase his salary to £9.4million per year including bonuses.

Though Cristiano Ronaldo has been the side’s top scorer this season, Paulo Dybala has enjoyed a fine campaign, The Argentina international has scored 17 goals this campaign and assisted 13, which clearly shows that he is ready to lead the club once Cristiano Ronaldo decides to leave.

Paulo Dybala joined Juventus in 2015 for £23 million but almost left the club last year for Tottenham Hotspur. However, he had a change of mind last minute and decided to stay at a club where he has earned four scudetto. And the Italian side are certainly taking all the necessary measure to make sure that the Argentine remains happy there and doesn’t change his mind.

(The above story first appeared on LatestLY on Jul 15, 2020 10:58 PM IST. For more news and updates on politics, world, sports, entertainment and lifestyle, log on to our website latestly.com).