Argentine Football Association (AFA) President Claudio Tapia said that he will not put any pressure on Argentina superstar and FC Barcelona captain to return to the national squad. 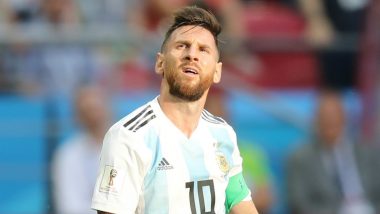 Buenos Aires, September 6: Claiming that Lionel Messi has given Argentina much more than he has received in return, Argentine Football Association (AFA) President Claudio Tapia said on Thursday that he will not put any pressure on the FC Barcelona star to return to the fold. "We have to be thankful. He has done a lot for the national team and we have repaid him in the worst possible way," Tapia was quoted as saying by ESPNFC.

"We miss him. But we have to let him be, in peace. He has to enjoy his family, his life. We shall see what happens later," he told TyC Sports. "Once we have a project, a name (new full-time coach), we will see what Leo thinks."

Messi is yet to win a major trophy with his country despite competing in five World Cups and eight Copa Americas. The 31-year old has scored 65 goals in 128 appearances since making his debut with Argentina in August 2005.

(The above story first appeared on LatestLY on Sep 07, 2018 10:15 AM IST. For more news and updates on politics, world, sports, entertainment and lifestyle, log on to our website latestly.com).