Mason Greenwood celebrated by making an ‘A’ sign as a nod to a friend and teammate Angel Gomes, who became a free agent after failing to agree to a new contract at United. The 18-year-old later also took to Twitter to pay tribute to his former teammate and captioned the image "A promise is a promise." 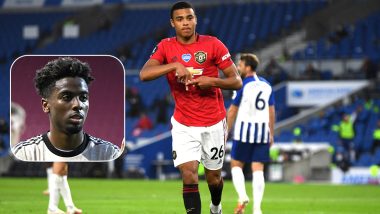 Young Manchester United forward Mason Greenwood Dedicated his goal to departing teammate Angel Gomes. Greenwood, who scored the opener in United’s 3-0 win over Brighton, paid a touching tribute to Gomes ad celebrated by making an A (as in Angel Gomes) sign using his fingers. Gomes, who joined the United academy as a six-year-old, left Manchester United after his contract expired on Tuesday. The talented attacking midfielder is considered one of the brightest prospects in English football and the club had tried to negotiate a deal but failed to reach an agreement. Manchester United vs Brighton, Premier League Match Result: Bruno Fernandes Double Steers Red Devils to Comfortable 3-0 Win.

Bruno Fernandes scored a double, with his second coming from a Greenwood assist, as United powered themselves to a 3-1 comfortable to regain the fifth place in Premier League points table and keep themselves in line for Champions League football next season Greenwood, who started his second successive league game, opened the scoring just 16 minutes into the match leaving Lewis Dunk confused with brilliant footwork before firing a left-foot shot into the right low corner.

Greenwood then celebrated by making an ‘A’ sign as a nod to a friend and teammate Gomes, who became a free agent after failing to agree to a new contract at United. The 18-year-old later also took to Twitter to pay tribute to his former teammate and captioned the image "A promise is a promise."

The tribute came as Gomes, a former United and England U18s captain, left the club on a free transfer after his deal expired. Both the club and player’s representative had been working to resolve the contract dispute and agree on a new deal for the last few months but nothing seemed to have materialised.

Gomes has already been linked to United’s Premier League rival Chelsea although manager Frank Lampard denied any interest in the player. Asked if Chelsea were making a move for the young prospect, Lampard replied in short words: “No.” He added, "Yes, I can elaborate to the point that it's never been mentioned at my end; so that's it."

Meanwhile, Greenwood netted his 13th goal across all competitions this season and sixth in the Premier League. He also has three assists to his name and looks set into becoming a regular player in Ole Gunnar Solskjaer’s set-up.

(The above story first appeared on LatestLY on Jul 01, 2020 10:34 AM IST. For more news and updates on politics, world, sports, entertainment and lifestyle, log on to our website latestly.com).