Griezmann opened the scoring for Barcelona against his old club from a rebound effort. Dembele’s shot from a Jordi Alba cross was saved by Remiro but the rebound ball fell straight at Griezmann’s path, who found the net with a left-footed shot. Six minutes later, Barcelona doubled their lead with Sergino Dest scoring his maiden La Liga goal. 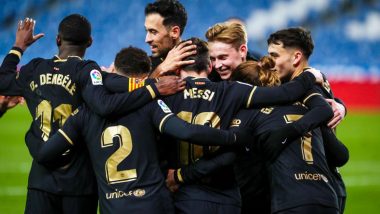 Lionel Messi and Sergino Dest scored two each while Antoine Griezmann and Ousmane Dembele also found the net as Barcelona thrashed Real Sociedad 6-1 in La Liga to move back to second in the table. The win helped Barcelona pip Real Madrid into second place. They are now on 62 points from 28 games, four behind Atletico Madrid and two ahead of Real. Messi, who surpassed Xavi to become Barcelona all-time top appearance maker, celebrated the milestone with a wonderful brace. The double took Messi’s La Liga goal tally to 23 goals, four ahead of the next best Luiz Suarez. Real Sociedad vs Barcelona, La Liga Match Result: Lionel Messi, Sergino Dest Score Double in 6-1 Win.

Griezmann opened the scoring for Barcelona against his old club off a rebounded effort. Dembele’s shot from a Jordi Alba cross was parried off by Remiro but the rebound ball fell straight at Griezmann’s path, who found the net with a left-footed shot. Six minutes later, Barcelona doubled their lead with Sergino Dest scoring his maiden La Liga goal after being played in by Messi. Messi Surpasses Xavi's Barcelona Appearance Record.

Dest then scored a second eight minutes into the second half finishing off an excellent team move. Pedri found Alba on the left channel and the left-back's dangerous low cross into the Sociedad box was finished off by Dest. With the game almost out of Sociedad’s hands, Barcelona started scoring for fun. Three minutes after Dest had netted his second, Messi got into the act. Sergio Busquets picked the Argentine with a long ball from midfield and Messi made great use of the space afforded to him before poking the ball past a rushing Remiro.

Dembele scored Barcelona’s fifth with a surging solo run on the left channel before finding the net with a wonderful left-footed curling effort. Messi then finished off the game and marked his milestone day with another brace. He started the move by finding Alba on the left, whose cutback was finished by Messi to complete the 6-1 rout.  Sociedad had pulled one back through Ander Barrenetxea but it was a mere consolation. Take a look at the goal video highlights of the match.

Barcelona, meanwhile, climbed to second in the points table and are only four behind leaders Atletico, who travel to Camp Nou later in the season. Barcelona will next host Valladolid before travelling to Madrid for the El Clasico. Real Madrid are two points behind Barcelona after 28 rounds and a win for Barcelona in the El Clasico will take them five points clear of the champions.

(The above story first appeared on LatestLY on Mar 22, 2021 09:27 AM IST. For more news and updates on politics, world, sports, entertainment and lifestyle, log on to our website latestly.com).