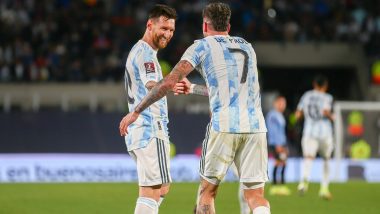 Argentina look to continue their undefeated run going as they take on Colombia in the latest round of CONMEBOL 2022 FIFA World Cup Qualifiers. The teams will meet each other at the Mario Alberto Kempes Stadium in Cordoba, Argentina on February 02, 2022. This will be Albiceleste’s second game of the international break after managing to defeat Chile without captain Lionel Messi. PSG 0-0 Nice (5-6 Penalties), French Cup 2021-22: Lionel Messi Returns As Parisians Exit Coupe de France (Watch Video Highlights).

Lionel Messi has been an integral part of the Argentina national team in recent years, helping them win the Copa America and also climbing up to second in the CONMEBOL World Cup qualifiers. However, the PSG star missed the previous game against Chile, in which Lionel Scaloni’s men managed to register a 2-1 win.

Lionel Messi was absent from Argentina’s game against Chile and is set to miss the second match of the ongoing international break as well. The Albiceleste skipper was tested positive for COVID-19 and having already secured qualification for Qatar 2022, he was left out of the national team squad as a precaution.

But despite not being on international duty, Lionel Messi has returned to competitive action after recovering from coronavirus. The Argentine skipper played in PSG’s French Cup tie against Nice. The 34-year-old managed to score from the spot but was unable to avoid the Parisians losing 5-6 after a penalty shootout.

Speaking of Argentina, they have already qualified for the 2022 World Cup and currently are looking to finish as high in the table possible. Lionel Scaloni’s men are one of two unbeaten teams in the competition and remain four points behind leaders Brazil in the table.

(The above story first appeared on LatestLY on Feb 01, 2022 04:58 PM IST. For more news and updates on politics, world, sports, entertainment and lifestyle, log on to our website latestly.com).